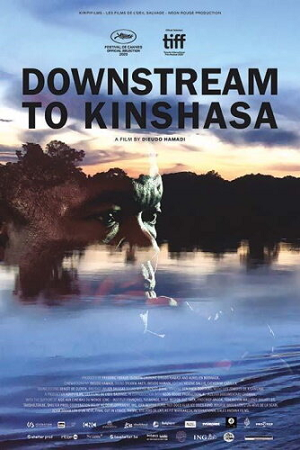 Director Dieudo Hamadi artfully weaves heart-wrenching stage and musical performances into this harrowing yet sublime cinema verite documentary, which closely follows victims of the Six-Day War on an epic voyage to advocate for compensation. Overlooked at home and abroad, the June 2000 Six Day War between Ugandan and Rwandan armies devastated the Congolese town of Kinsangani, killing over 1,000 residents and injuring many, who are yet to be compensated the money they are owed by their government.

Downstream to Kinshasa serves as a visually stunning contrast between movement and stagnation: motorbikes rumble past a hobbling procession; at an orthopedic appointment, a prosthetic, slow to remove, manipulate and examine, is adjusted using a loud, whirring lathe; their large barge barrels downstream towards a landscape that would seem perpetually out of reach; and once arrived at long last, there is no resolution; there is no compensation.

With patience and creativity, often using natural light and even flashlights with beautiful results, Hamadi showcases the group’s day to day lives as well as theatrical and musical performances that mourn loss and advocate for recognition through compensation. This film is one of a kind, and truly spectacular: it fundamentally alters one’s expectations of documentary film and must be seen and shared. Downstream to Kinshasa is highly recommended for Political Science and Peace and Conflict Studies, Disability Studies, African Studies, Documentary/Film Studies, History, and Performance.