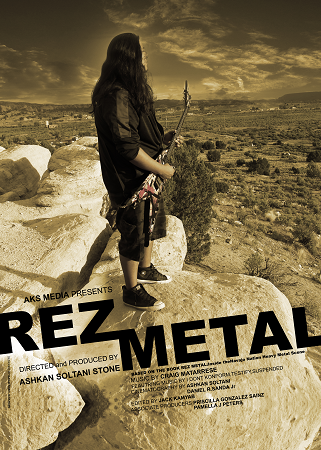 “The suicide rate among the Navajo Nation youth is nearly twice as high as the national average and also the second leading cause of death.” According to Wikipedia, “suicide among Native Americans in the United States, both attempted and completed, is more prevalent than any other racial or ethnic group in the United States. Native American youths also show higher rates of suicide than American youth of other races.”

This award-winning feature-length documentary focuses on Indigenous heavy metal rock band, I Dont Konform (IDK). The band's existence serves a multitude of objectives to include addressing teen suicide, uplifting the youth, and serving as rez metal representatives on an international platform. Global recognition is coupled with assistance from Flemming Rasmussen, Grammy award-winning producer of bands such as Metallica, Iron Maiden, and Pretty Maids.

IDK’s popularity and lyrics buck traditional norms and stereotypes of the docile Native American. Their music provides a venue for young adults to cope with the inequities and injustices of living life in a rez bubble. Telling truth through music is one of many outlets used to combat teen suicide that otherwise goes unreported by mainstream media and society. This reviewer is reminded of the lack of opportunities afforded young Native Americans as depicted in the television series, Reservations Dogs. Reservation Dogs features all indigenous writers and directors and is a contemporary look at four teens on an Oklahoma rez contemplating their future following the suicide of their best friend.

Interspersed with footage of the band’s performances are conversations with Edmund Yazzi, Thoreau’s Councilman, and Johnathon Nez, Vice President of the Navajo Nation, both strong advocates and supporters of the band and their message. They embrace metal music as incentives to instill confidence in the youth--to wit, “you matter”--as well as provide families with opportunities to have uncomfortable conversations about teen suicide, especially in Thoreau where suicide rates are alarmingly high. IDK’s music serves as a catalyst for change. It gives Indigenous youth hope, inspires them to remain diligent and resilient, and gives them a voice to openly express their opinions in a society that would otherwise silence them.

In addition to performing at local music fests, the group believes their music is deserving of a larger audience. They enlist the help of producer Flemming Rasmussen who values the importance of rez metal. Rasmussen arrives on the rez to record initial demo tapes. Soon thereafter, the band flies to Europe to record their debut album. In spite of low CD sales, due to a saturated metal market, the band is super proud of themselves to have come from nothing, to be able to travel to Europe, produce an album with a well-known producer, and return home to headline music fests. This circuitous accomplishment brings great happiness to the band, and this reviewer is very happy for them.

In English with English and Spanish subtitles.

For more information about the history of heavy metal, be sure to check out its wiki entry.