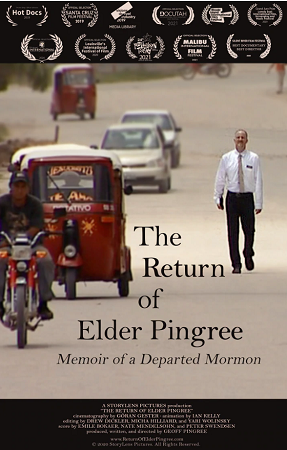 The Return of Elder Pingree 2020

Geoff Pingree went to Guatemala as a young Mormon missionary and spent two years spreading the gospel. He returns 25 years later to make this documentary in an effort to "understand what it was that I experienced here," as he explains it to a Guatemalan congregation. The film is well-constructed: as he retraces his missionary route and unfolds the story of young Elder Pingree, we also gradually learn more about Pingree's current agnostic attitude toward the Mormon faith.

It's interesting to hear about his struggles as a Mormon missionary, and his story is richly supplemented with photos and his journal entries from the time. He is successful in tracking down many of his former friends and converts. Most are still active in the church and are sad to learn of his lack of faith. Some of them comfort themselves with assurances that he will come back to the fold; others merely credit him with acting in good faith at the time; most are deeply disappointed, even as they are glad to see him again. Though resolutely noncommittal about Mormonism, Pingree seems reluctant to acknowledge that this puts him in a very different place from the believers he's visiting.

It's a moving documentary, but it does seem like it's more for Geoff Pingree than for us. Pingree says very little about what he finds on his return, or about its impact on him. It's fine for the viewer to be left pondering some questions, but it's too bad that Pingree declined to enter the conversation. Does it matter that the faith he gave them made their lives better? Does he feel any responsibility to his converts, either to set them free from lies, or to refrain from disturbing their faith? Did his filmmaking trip change his outlook on his faith at all? On his mission? Or did his effort to understand better come up empty?