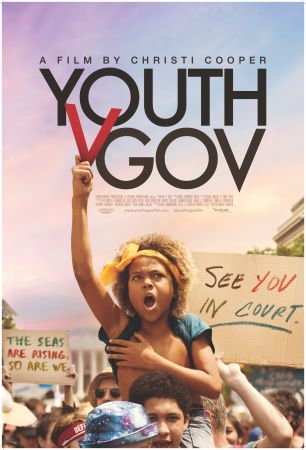 YOUTH v GOV is the story of the Juliana v. The United States of America constitutional lawsuit and the 21 American youth, ages 14 to 25, who are taking on the world’s most powerful government. Since 2015, the legal non-profit Our Children’s Trust, has been representing these youth in their landmark case against the U.S. government for violating their constitutional rights to life, liberty, personal safety, and property through their willful actions in creating the climate crisis they will inherit”.

The viewer gets to see “Democracy and Law in action” started by a group of young people concerned about climate change. It is a step-by-step view of this lawsuit against the United States government. Ultimately, the United States Court of Appeals for the Ninth Circuit held that ordering the federal government to adopt “a comprehensive scheme to decrease fossil fuel emissions and combat climate change” would exceed a federal court’s remedial authority. 5. Id. at 1171.

The result in Juliana is not surprising, as the Court held that plaintiffs lacked U.S. Constitutional standing to bring their claims and they failed to show that the relief they sought was substantially likely to redress their injuries. Regardless, plaintiffs failed to establish that the specific relief they sought was within the power of an Article III court. According to the ruling, it was beyond the power of an Article III court to order, design, supervise, or implement the plaintiffs' requested remedial plan where any effective plan would necessarily require a host of complex policy decisions entrusted to the wisdom and discretion of the executive and legislative branches. As such, the Court concluded “the plaintiffs' case must be made to the political branches or to the electorate at large.”