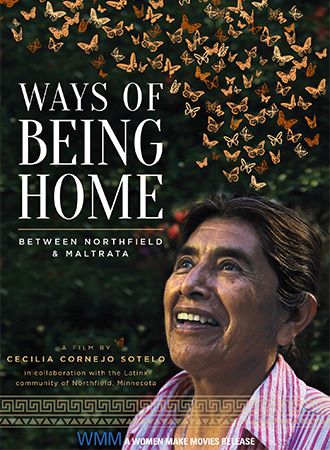 Filmed between 2016 and 2019, Ways of Being Home focuses on the lives of immigrants from Mexico (primarily from the mountain town of Maltrata, located in the state of Veracruz) who have crossed the border into the United States and now live in Northfield, Minnesota.

This quietly told story, (filmed with full participation from the immigrant community), highlights with great effectiveness the hardship and struggle immigrants from Mexico face after crossing the border into the United States. The film shows the day-to-day realities of immigrants caught between two worlds, the world they left behind and their new world, a world where the culture differs radically.

Ways of Being Home packs a punch, despite being quietly told; the filmmakers wisely chose to let the participants speak for themselves while revealing what everyday life looks like in a country where they are undocumented. It is a world of constant anxiety, where a run-in with law enforcement could result in deportation; where the lack of upward economic mobility due to an inability to access higher paying jobs results in exhaustion as people work two and sometimes three jobs; where many years pass without the ability to visit loved ones in Mexico.

Why do they decide to immigrate, despite the dangerous trip crossing the border and the uncertainty that awaits them in the United States? According to film participants, in Maltrata the choice is stark: Eat or dress yourself. Indigenous people of Mexico were not served well by the North American Free Trade Agreement (NAFTA) of 1994, which eliminated most trade barriers between the United States, Mexico and Canada. Due to NAFTA and other economic policies enacted by the U.S. and other countries, they make the difficult decision to immigrate to help their families and loved ones in Mexico financially, for education purposes, or to join other family members who have already immigrated. As one interviewee says, “Everyone has their story of why they left Mexico, but no one leaves lightly.”

Ways of Being Home was filmed during the ascendancy of Donald Trump to the U.S. presidency, which added another layer of anxiety to undocumented people’s lives. Trump’s administration quickly enacted anti-immigration legislation, which prompted community activism and protests in Northfield; many of the undocumented people in this film are long-time residents of Northfield and are woven into the fabric of the city, and their U.S. neighbors and friends are filmed supporting them and rejecting the anti-immigrant stance of the new administration.

Despite the weightiness of the subject matter, this is a film full of life. Exuberant, colorful, respectful, it juxtaposes scenes of life in Maltrata with ones in Northfield, showing people moving through life without commentary, letting the scenes tell the story as people go to church, participate in celebrations, visit neighbors, etc.

When filming one on one interviews in Northfield, participants are not shown full face or at all in some instances, to protect their undocumented status. Participants tell their stories with no self-pity, in a matter-of-fact tone: They are doing what must be done, for themselves and their loved ones, no matter the price paid. While discussing retirement, one person says they have no retirement savings and therefore cannot imagine a world where they can stop working at some point: “God forgives, but time doesn’t”.

The filmmakers respectfully acknowledge participants and allow them to just exist; their stories are told without judgment, their realities are shown without resorting to savior-ism. To accomplish this, there must be an extraordinary amount of trust between filmmaker and participant, and this trust is a major strength of the film. Subtitles are used when needed and animated butterflies, a delightful touch, denote transitions between locations and scenes.

As one participant notes when discussing their decision to immigrate to the United States: “Here, there is money, but there is no freedom.” Ways of Being Home deftly illuminates the high costs the undocumented residents of Northfield have paid, while also roundly celebrating their humanity. Displacement is the heavy price paid and home means so much more than a geographic location in this moving film.