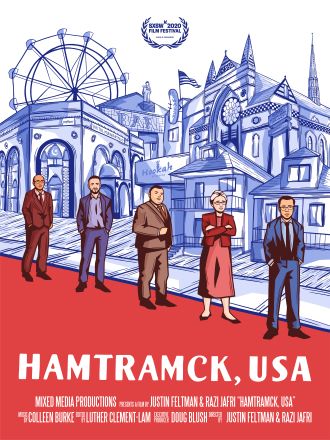 ”Hamtramck, Michigan is a city built by immigrants. The city thrived thanks to Polish Catholic immigrants drawn to the industrial boom of America. In the late 1990's, Bangladeshi and Yemeni Muslim immigrants revitalized this post-industrial city. This multi-ethnic city prides itself on its mantra "The World in 2 Square Miles," boasts about the over 30 languages spoken in the schools and the diversity that comes with it”. And so, begins this documentary film.

Filmmakers Jafri and Feltman have created a documentary that not only covers the scope of local American politics during an election year but also explores the cultural impact of the diverse community of people. How these different cultures (Polish and Muslim) interact with each other through local customs, festivals and the like gives this documentary a unique richness that I did not expect.

Quite frankly, Hamtramck, could be ‘any’ city in America today when it comes to local politics. It’s one group or groups against another when it comes to fighting for one’s community on matters of importance for that community. This documentary illustrates how well these diverse cultures are willing to do to sit down and talk about differences leading to a mutual and natural respect for each other. This is what makes this film so great. A diverse community unified and working together as ‘one body’ towards practical and sustainable goals for the betterment of their community.