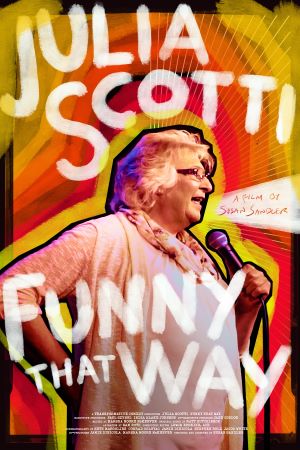 Julia Scotti: Funny That Way is an entertaining and moving documentary about the life and career of the titular comedian. Shot over the course of five years, the film covers various aspects of Scottie’s personal and professional life, focusing mainly on her experience coming out and transitioning as a trans woman while in her forties. Most of the film is live action, but it also includes some short, animated scenes that are created by Sam Roth and narrated by Scotti.

Throughout the film, Scotti discusses key aspects of her journey from married male-presenting person, father, and professional comedian, to transwoman retired from comedy and working as a public-school teacher, back to professional comedian and public figure. Her story is uplifting yet bittersweet, as her journey was not without challenges, the most painful of which seems to have been Scotti’s court-ordered loss of custody of her children and the subsequent period of estrangement from them that lasted over a decade. This and other aspects of her life are presented in the documentary through various types of footage – some shot specifically for this project and the rest compiled over the course of decades and including excerpts from Scotti’s home movies as well as her interviews, public speaking appearances, and comedy shows. Memorable moments featured in the film cover a range of experiences and include Scotti’s triumphant and public coming out during a 2016 appearance on America’s Got Talent (an appearance that brought national attention to her story and reinvigorated her career in comedy) as well as excerpts from an earlier comedy set featuring Scotti presenting as a man and delivering a succession of homophobic and transphobic jokes. The filmmakers juxtapose this latter material with Scotti’s present-day, real-time reaction to rewatching the footage with her son. This and other scenes provide viewers with insight into the complicated developmental process that Scotti has undergone.

Julia Scotti: Funny that Way is worthwhile viewing. Viewers of this seventy plus minute documentary will gain an increased awareness of Scotti’s experiences with gender dysphoria and transitioning, as well as with her progress toward self-realization and self-acceptance. The filmmakers and Scotti provide viewers with numerous examples of the challenges she’s faced while transitioning in her forties. Coming out and transitioning at this point was challenging but necessary, as Scotti explains in the film, “I reached this point where I couldn’t avoid my truth anymore.” Having embraced that truth, Scotti, who is now approaching seventy years old, is dedicated to living on her own terms and, in her own words, “doin’ what I wanna do.”

The overall message of Julia Scotti: Funny That Way is one of self-acceptance, which seems apt to resonate with viewers in various fields. It is likely to be of greatest interest to those in the fields of communication, LGBTQ+, and women’s or gender studies. Potential viewers should note that while the film overall is appropriate for audiences of high school age and up, it includes brief discussions of suicidal ideation, transphobia, and homophobia, along with language that some may find objectionable.