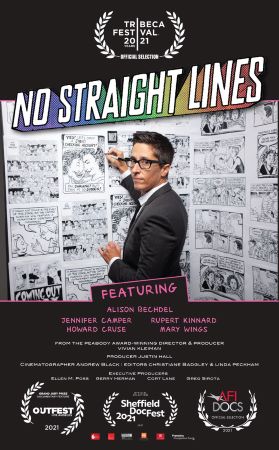 No Straight Lines: The Rise of Queer Comics 2021

No Straight Lines: The Rise of Queer Comics chronicles the progress of gay comics in the United States. From the genre’s origins in underground comics to syndication in the 1990’s, viewers will receive a broad overview on this topic. Stereotypical superhero themes aside, this film gives perspective on the diversity of stories that can be conveyed in comics.

Informative and entertaining. There are interviews with premier LGBTQ+ artists in the genre such as Howard Cruse and Alison Bechdel. Bechdel, in particular, is captivating when speaking to the art of making comics. The comic strips presented in the genre are rich in personal experience as well as satire. General audiences will appreciate the freedom of speech narrative.

A companion piece is the documentary Crumb (1995) featuring the popular autobiographical comics of underground cartoonist Robert Crumb. Appropriate for collections seeking an introductory resource on the gay comics’ genre for adults. A comprehensive mix of empowerment, history, grief and cultural analysis of the gay community through the medium of comics.