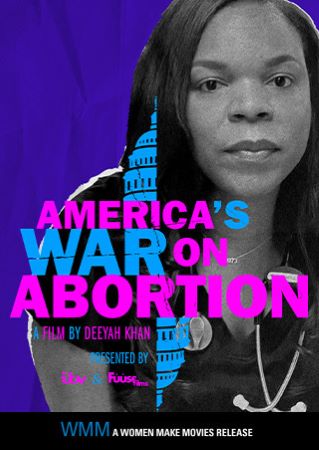 Deeyah Khan’s unflinching look at the current legislative, movement-based, and often violent assault on women’s reproductive rights in America focuses on the people on the front lines of both sides: doctors, clinic staff, volunteers, patients, and protesters. Remarkably compact at 65 minutes and bookended by the news of Ruth Bader Ginsburg’s death in 2020 which provided Donald Trump with the critical opportunity to fill her Supreme Court seat and inch closer to overturning Roe v. Wade, the film delves into a war “for the soul of the country” in intimate, devastating detail.

The Alabama Women’s Center is one of three clinics in the state providing abortions (down from 20 in 2000) and is one of the few in the country owned and operated by people of color. In Kansas, Dr. Joseph Tiller was shot and wounded in 1993 and then assassinated in 2009 after being demonized by the anti-abortion movement for performing late term abortions. His clinic closed after his death but reopened (without windows due to potential snipers) and has remained a target of violence and harassment at the so-called “ground zero” in the war on abortion. Khan takes us to these two clinics and there are remarkable sequences, including one in which a protester threatens to sexually assault her on the basis of her gender and assumed religion, and another in which volunteer “clinic defenders” guide patients to and from their cars using large golf umbrellas to shield them from the protesters’ constant stream of verbal abuse and to hide their identities against continued harassment. In another scene a follower of the shadowy Army of God (an organization responsible for bombings, arsons, acid attacks, and at least three murders of abortion providers) speaks softly from his recliner, explaining how he could face himself in the mirror only after setting fire to clinics, following the movement’s mission to save unborn children through the use of force. He served seven years in prison for a string of arsons and bombings in the 1980s and here expresses remorse that age and health issues now keep him from continuing such direct action.

The heart of the film consists of interviews with patients, each at a different stage of pregnancy or recovery and with a story of poverty, rape, or fatal medical conditions that led them to seek an abortion. They share their fears, guilt, and faith, as well as navigate harassment from protesters and increasingly restrictive measures (Alabama requires two pre-procedure medical visits spaced 48 hours apart as well as an ultrasound) which add emotional, logistical, and financial burdens to their experience. The women’s quiet anguish contrasts with the protesters’ megaphones, slurs, and graphic signage, and the film provides a portrait of two sides at intractable odds. The film’s greatest strength is the minimal narration and the focus on the people who speak for themselves, from chilling hate speech to despairing tears to small words of kindness.

Statistics track the anti-abortion movement’s increasingly violent tactics; incidents of hate mail, obstruction, and disruption of clinics have increased 24-fold since 2014, and half of all clinics have reported increases in the numbers of harassments, threats, and violent attacks since Donald Trump’s election in 2016. The film ends with the death of Ruth Bader Ginsburg in late 2020. Since than her seat has been filled by the conservative Amy Coney Barrett and a Supreme Court leak indicated that she and four other justices support striking down Roe v. Wade, and Texas has passed the most restrictive abortion law in the nation. The Alabama Women’s Center is embroiled in a lawsuit over a state law making abortions a felony. Dr. Yashica Robinson speaks for many when she fears that Roe v. Wade may be overturned, forcing them to shut down. But she also speaks of hope, and she continues her work at present.

The current climate makes this film an especially powerful portrait of those on opposing sides of a war that drives politics, affects generations, and divides the nation. What comes next is unknown, but America’s War on Abortion provides context, shows both sides, and illustrates just what is at stake.

America’s War on Abortion would be well-suited for courses in women’s and gender studies, political science, health and human services, communication, and other disciplines. The film lays bare one of the most divisive issues in modern American history, in painfully human terms.