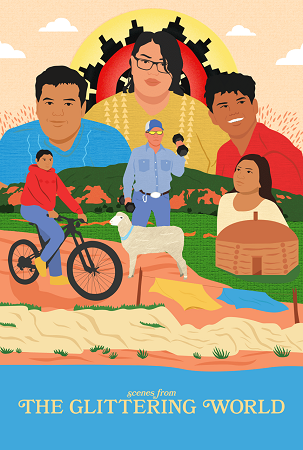 Scenes From the Glittering World 2021

Scenes From the Glittering World follows the lives of three indigenous students during their senior year at Navajo Mountain High School. The students are members of the remote Diné community on the Navajo Nation reservation, where the nearest grocery store is a two-hour drive away. The students must traverse a mountainous desert landscape by bus daily to attend one of the most physically isolated public schools in the continental United States.

Navajo Mountain High School was built in response to a court decision that found the State of Utah impeding the rights of Navajo students to gain an education. The school has the size to accommodate a large number of students, equipped with amenities that can be found in most modern-day public schools, yet during the time this documentary was filmed, it served a student population of only thirty seniors. Students take classes in math, English, and science, but unlike the curriculum in other national public schools, classes related to Navajo culture and language are equally important.

Scenes from the Glittering World artfully captures and acknowledges the unique struggles faced by indigenous students from this community. Like most students navigating the highs and lows of adolescence, these three students also seem to persist in a constant state of opposing forces, precariously finding their footing as they contend with their ancestral past and future, family responsibility and education, moments of opportunity and impediment, and feelings of hope and futility.

In addition to the students, viewers also are able to hear the perspectives of the school’s teachers. Frustrated by an inability to engage the students with failing grades, they wonder how they can entice the children to pursue their ambitions, while simultaneously recognizing there aren’t “enough carrots.”

An elder Navajo teacher speaks of a prophecy that says if culture and language are lost, all is lost. Herein lies the existential dilemma that exists for indigenous cultures navigating life in an ever-evolving landscape. Scenes from the Glittering World leaves viewers to consider how culture and heritage can be preserved and honored while navigating a new and changing world.