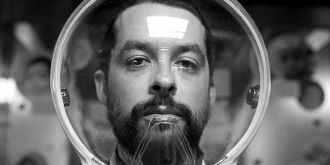 Ana Katz’s The Dog Who Wouldn’t Be Quiet, filmed in digital Black and White, and occasionally interspersed with sketches, follows several years in the life of the film’s protagonist, Sebastian (played with gentle pathos by Daniel Katz), whose journey as a somewhat itinerant worker begins because of the eponymous dog. We follow Daniel from job to job, and major life event to major life event, including losing his dog, falling in love, having a child, and dealing with a strange environmental catastrophe that poisons the atmosphere above four feet from the ground.

Taken scene by scene, there are some very naturalistic performances and compelling shots, but where the film falls short is a lack of cohesive narrative. We never really get to know, in depth, the protagonist or the characters who people his life. The dramatic jumps in time never allow for strong character development nor a central story to unfold. The film is subtle and quiet, and may be a commentary on class, but, if so, it doesn’t make any strong statements.