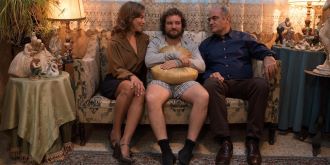 7 Reasons To Run Away (From Society) is a series of vignettes ostensibly tackling major social issues, including class, race, economy, and technology. Taken all together, the film presents a darkly comic view of modern Spain. Conceptually, and structurally, the piece resembles the American anthology Tales from the Darkside with a bit more social consciousness.

The film is a fun and funny satire, but perhaps a bit dark for many general audiences. Performances throughout are uniformly excellent as is the camera work and direction. For classroom use, it may be successful in sparking conversations about social issues of the day, but trigger warnings may be advised, including violence and discussion of abortion and child abuse.