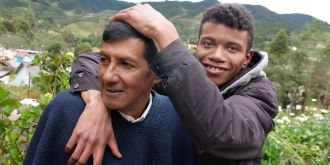 Between Fire and Water 2020

Between Fire and Water follows Camilo as he struggles with his identity as an adopted member of the Jojoa family of the Quillasinga Tribe, living in the Cocha Lagoon area of southern Columbia. When initially adopted by the then childless Jojoas, Camilo is a tiny baby his mother left with a friend. This friend has multiple children of her own and cannot provide for Camilo on a long-term basis. She takes Camilo to an adoption center, where the Jojoas soon adopt him. Although the Jojoas try very hard to treat Camilo as their child, it is evident that he is black, and soon he stands out from the Quillasinga people around him. Although Camilo tries to adopt Quillasinga ways and the tribe officially accepts him as one of their own, he soon faces bullying and racism from others in his age group. At points in the film, even the Jojoas struggle with accepting Camilo as truly Quillasinga.

As Camilo reaches adolescence, the situation worsens, especially as he begins to doubt his own adopted identity and decides to search for his biological roots. Racism and bullying by his peers reach such significance that he drops out of school. Following escalating difficulty with his adopted tribe and adopted family, a tribal conference, well-presented in the documentary, reasserts that the Quillasinga officially accept Camilo as a tribal member and a member of the Jojoa family. Things improve for Camilo, and he begins to research his origins in an organized manner, supported by the Jojoas and his tribe. Following several faint trails, he finally finds that his biological mother, who worked in the sex trade, is dead, and no one knows who his biological father is. Camilo and his adopted father visit the city his biological mother lived in, and he connects superficially with his black heritage. Ultimately, he accepts his adoptive Quillasinga heritage and seems to find peace with himself.

The documentary does an excellent job presenting the area Camilo lives in and many of the Quillasinga Tribe’s customs and culture. The struggles the tribe and the Jojoa family face are not short-shifted, and the confusion, heartache, concern, and love toward Camilo are evident. Unfortunately, the film fails to document the bullying and racism leading Camilo to drop out of school and which drives the whole film. Columbian adoption procedures, bureaucracy, and personnel appear balanced and supportive. Between Fire and Water passes no judgment on Camilo’s eventual decision to continue to live his adoptive lifestyle and not seek a closer identity with his biological heritage.

This film is highly recommended for many of the above reasons. It also documents the inner struggle Camilo faces, who is torn between his lived experiences as an adopted member of the Quillasinga Tribe and his wish for a possibly better experience on his biological side. The documentary does not solve this conundrum, but the realization that being part of something one is familiar with may be better than struggling to become part of something vague and unfamiliar. Interestingly this is the dilemma the Quillasinga face as they struggle to renegotiate their existence in Columbia and the more modern but highly impersonal world around them. Unlike other documentaries addressing the issue of identity and adoptive versus biological origins, Between Fire and Water is forced to deal with an adoptive origin that is intact but a biological origin that hides behind death and veiled by time. This somewhat unsatisfactory situation drives the documentary and Camilo. It is handled well and makes this a compelling film from which most people can benefit. This film is highly recommended for any high school or adult group and should be widely available. Churches dealing with mission work, academics dealing with adoption, family, diversity, and racism, philosophers dealing with identity and belonging, and individuals interested in any of these areas would most likely find this a meaningful film.