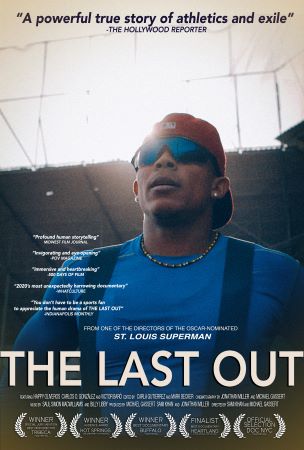 In The Last Out, filmmakers Sami Khan and Michael Gassert tell the story of three young Cuban baseball players, transplanted from their homeland, whose dream is to get signed by a MLB team and make it in the big leagues. The documentary, with its unassuming, personal style is very much a Hoop Dreams (1994) for modern Latin baseball. Like Hoop Dreams the filmmakers and the camera remain a silent observer. The closeness of the camera to its subjects puts the immediacy of each player’s journey in both baseball and in life at the forefront of the film. This style illustrates the timelessness of the situation for these young men, as ballplayers but also as potential breadwinners for their families. The hope for their success is reflected in several interviews with family members back in Cuba.

The film has perhaps a villain, the famous Cuban-American agent Gustavo Dominguez. “Gus” as he is referred to by his contemporaries, offers only empty promises and cold realities for the players by the end of the film. However, The Last Out largely reserves any overall judgments for Dominguez and others to the viewer, despite covering difficult topics like human trafficking, sports colonialism, and immigration. At the end of the film even Dominguez can be potentially attributed as merely a product of this complex system.

At times heartbreaking and often transcending sport to illustrate the intricacies of the immigrant experience, The Last Out represents an excellent use of sports to showcase universalities of the human experience. By the end of the film, the viewer cannot help but be more interested in Happy, Carlos, and Victor’s lives beyond baseball than their success within the sport. Running at a brisk eighty-four minutes the film perhaps leaves those lives, and how they fit into a larger picture of migrancy and geopolitics, a bit unexplored. Nevertheless, the film represents a shining example, much like The Two Escobars (2010), of the connection between sports and larger issues and would represent a worthy tool for anyone looking to discuss topics of immigration, migrancy, Latin American history, and the dark side of sports economics, among others.