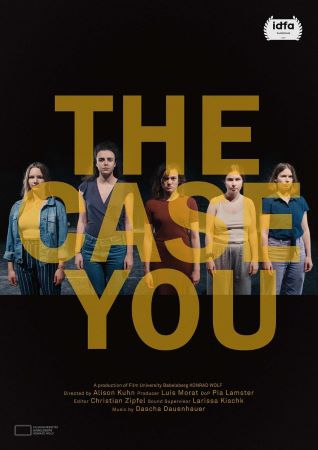 The Case You explores power and abuse in the Entertainment Industry specifically and the objectification of women in general through interviews of and recreations by several actresses who experienced varying degrees of exploitation and assault in an audition process. The director and producers conducting the (filmed) auditions subsequently used the material to create a documentary-style film from the footage without the actresses’ consent. By gathering some of the actresses who had been exploited into a black box theatre space documentarian, Alison Kuhn in The Case You gives the women a chance to tell their story in a relatively unmediated environment. Through reenactments, she provides visceral engagement that allows the audience to understand the power dynamics at play. Obviously, the material is edited, and the story is shaped but at no point does the viewer feel that the narrative is not formed by the women. In contrast to the film created from the audition footage, The Case You empowers the women to tell their own stories.

The stylized nature of the film opens with the actresses literally walking toward camera and confronting the audience, accompanied by a wonderfully evocative soundtrack. We see the setting up of the space by the filmmakers, which indicates transparency. The subjects describe their passion for the pursuit of acting as a profession in sit-down interviews setting the stage for the retelling of their experiences of assault. The description of the events as directed by the women recall the disturbing scenes in Joseph Oppenheimer’s The Act of Killing where perpetrators of the 1965-1966 Indonesian genocide re-enact their crimes - only, in this case, with the victims replaying the events, not the wrongdoers. The film also brings to mind Martha Coolidge’s Not A Pretty Picture, a docu-drama where Coolidge directs actors to perform the rape she experienced as a teenager. All of these films demonstrate what can be gleaned by bringing to light every element, even the most trivial details, of traumatic events. In Coolidge’s Not A Pretty Picture and Kuhn’s The Case You it also empowers the traumatized to reconstruct the narrative as they experienced it.

The film that was created from the audition material of these women provides evidence of the assaults but the producers (some who were identified as women) and director of the film (apparently a highly regarded filmmaker) justified it as an artistic expression exploring power and abuse and the lengths to which actors will go to attain their dreams. The film was set to be screened at a film festival until social media outrage prevented its being shown. The festival, however, went ahead with a panel - ironically titled “Abuse of power in the Movie Industry” - which filmmaker Kuhn played for the women during the filming of The Case You. We watch and listen as they watch an indignant festival coordinator discuss in the panel the lack of power, he feels thanks to the cancel culture environment interfering with what has been selected for exhibition at his festival.

The panel included an actor that one of the women recognized from the audition scenario. The women were led to believe from the casting call the film they were auditioning for was a fictional story about incest. This actor as well as another woman on the panel laid all of the blame for the assaults on the actresses. He remarked that it was “so disturbing to watch. How many of them came with such hunger to play this character,” implying of course that the abuse would not have happened if the actresses simply had not allowed it. The woman on the panel suggested it is like having an umbrella for the rain, you must be prepared for these things to happen. Which begs the question - do we accept things as they are simply because this is the way they have always been or is change possible? Is abuse of power simply inevitable and the fault of the victims or is there more to it and can we as a society do something to change the structure? As one of the subjects in Kuhn’s film observes, the analogy of the rain is “unfortunate” because rain is not something we can influence but exploiting people is something we do have the power to change.

Filmmaker Alison Kuhn was actually one of the actresses who took part in these auditions and so decided to create The Case You while attending film school in order to give these women a forum to tell their story. Abuse of power may be ubiquitous, but its inevitability is questioned in this wonderfully nuanced documentary which looks at desire and power through a divergent lens.

The Case You is highly recommended for courses in women’s studies, any course addressing politics and power, documentary courses, as well as for acting conservatories and film production programs in order to spark discussions about ethics in filmmaking.