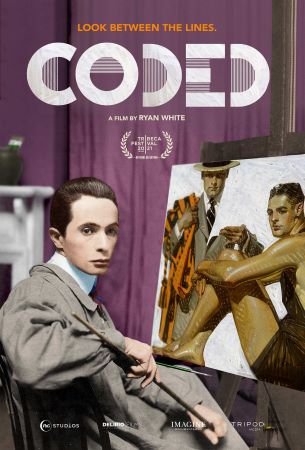 Coded: The Hidden Love of J.C. Leyendecker is a documentary short film that details the impact of Leyendecker’s life and work on advertising, but also on representation of queer identities in public spaces. Using the voices of historians, a creative director and a trans model, this 29-minute documentary gives insight into a man who is responsible for many of the images we look back on today as representative of classic Americana; he was even a predecessor and mentor to Norman Rockwell.

While this is a biographical film, it also offers a message for those of us watching in the present, and those who will watch it in the future – though the message may feel as though it is too late in coming. When Leyendecker came to the United States, it was on the heels of Oscar Wilde’s imprisonment for being gay. When Leyendecker dies, it is in the era of McCarthyism and a period of strictures on “other-ness.” Just as Leyendecker used his male lover as a model for arrow shirt collars, and used gay-coded imagery in his advertisements, so too did Subaru use a vanity license plate to signal to lesbians in the 1990s.

Through Coded, we are reminded of the cyclical nature of the world, that if we do not learn from the past, then we are simply going to go around the same wheel once more. Above all, we are shown images of joy at representation, and reminded that people succeed when they can live their truth, and when they find themselves reflected in the world around them.

It may feel as if Coded ends on too positive a note, and when this was released in 2021, we were not facing some of the challenges that exist in 2022. While this does not discredit the film, it does leave it as a place to start a discussion with a class, and to prompt the question, “What next?”