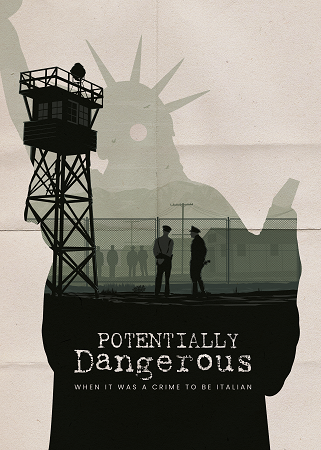 Potentially Dangerous: When it was a crime to be Italian shines a light on “una storia segreta” in United States history, the overlooked story of Executive Order 2527, which declared 600,000 non-naturalized Italian immigrants enemy aliens, thereby paving the way for the detention and forced relocation of thousands by February 1942. Director Zach Baliva artfully interweaves expert historical perspectives (including historian Lawrence DiStasi), with dramatic letter readings and first-hand accounts by the adult children and grandchildren whose family members were detained, often in the middle of the night, with no information as to where their loved ones were sent.

Baliva expertly paces this 50 minute feature, first outlining the historical facts and emotional gravity of this overlooked immigrant experience, and using the second half of the film to highlight the impact of the detentions and forced relocations. Baliva takes special care to outline the intergenerational trauma and internalized shame of this experience, elevating how this impacted Italian American identity, as well as showcasing efforts to document and hold the government accountable for these harmful actions. As such, the film is highly recommended for courses focused on immigration, U.S. History (especially those focused on World War II), ethnic studies, as well as for general collections. Of particular interest to libraries will be the documentary’s depiction of the healing role that creating the touring exhibit “Una Storia Segreta” played in both validating and making real families’ experiences. This documentary serves as a highly unique and wonderful complement to the many canonical documentaries on the much broader forced removal of Americans of Japanese ancestry under Executive Order 9066 (including the relatively recent films And Then They Came for Us and Resistance at Tule Lake, giving students and citizens a fuller, critical understanding of the role forced removal, detention, and incarceration played in wartime America.