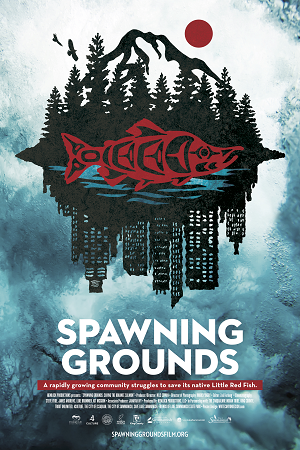 The documentary Spawning Grounds: Saving the Little Red Fish explores the effects of explosive growth and development in the Seattle metro area on the local Kokanee salmon. The Kokanee, also nicknamed the “little red fish,” are a declining population of fresh-water salmon residing in the Lake Sammamish Basin. These little red fish are unique in their genetic makeup from other salmon and are culturally and historically significant to the area. Spawning Grounds details attempts by local governmental scientists, community activists, and the Snoqualmie Tribe to restore the Kokanee population in the Basin.

The thoroughness of this documentary is commendable. The director paints the portrait of a changing community through interviews with those involved in the restoration effort. The interviews with the Snoqualmie Tribe leaders are particularly moving and detail the cultural importance of the Kokanee to the Tribe. There are engaging graphics which are used to effectively explain scientific concepts. Additionally, the documentary details the restoration efforts over a time period of approximately five years, thus providing a good example of the long-term planning and collaboration that is needed for environmental restoration projects.

This thoroughness in presentation, however, results in a slow-paced film. Viewers may find the pace surprisingly refreshing (especially given the current media landscape) because it provides time to reflect upon the content. Indeed, this documentary, combined with enchanting images of the Pacific Northwest, results in a film that will engage many viewers with an interest in scientific history, environmentalism, and/or community projects.

At times, however, the direction of the documentary is unclear; the focus fluctuated between the restoration’s scientific story and the collaborative efforts of local groups to save the Kokanee. Perhaps the film would have benefited from a voice-over narrator to assist in the storytelling in order to smooth transitions between narratives. Notably, Spawning Grounds lacks coverage of opposing viewpoints.

Overall, this documentary is recommended for middle-school through general adult audiences. Spawning Grounds’ content is appropriate for school and academic programs addressing ecology, environmentalism, and/or sociological issues. This documentary could be used as a starting point to discuss issues such as the effects of human development on local wildlife or the costs and benefits of community partnerships. Spawning Grounds is a worthwhile addition to many library collections.