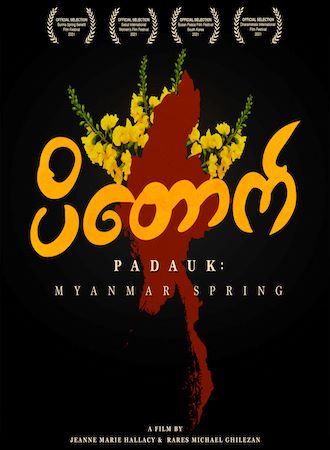 In Myanmar, the results of their November 2020 election were thrown out in a military coup resulting in the arrest of elected officials. The film Padauk: Myanmar Spring begins in February after the military has overthrown the Myanmar democracy as the citizens take to the street in protest. This film attempts to tell the stories of leaders and participants in the non-violent protests in Yangon. Protestor Nant, a 26-year-old office worker and other front-line leaders such as Zew, Maung Saungkha and Yin Nyein feature heavily as they discuss their hopes for rallying the people against the military government and the retaliation the protestors of Myanmar have faced by the military. Early protests spawned a new artistry of dissent in Myanmar vibrantly showcased through street art, poetry and song highlights the call by protestors for the freedom of expression and human rights.

An interesting aspect of this documentary is how the protestors of 2021, especially the younger Gen Z youths, were able to understand the Rohingya ethnic cleansing of 2017 and other perspectives that had been shared by ethnic minorities in the country for decades. The film also depicts how the current protests galvanized the Burmese and the ethnic minorities into forming multiethnic coalitions to oppose military rule.

As time continues, military arrests, shooting and murder of students, artists, poets and leaders shapes what the continued protests means to the citizens of Myanmar as well as the cost at the hands of the military government. The formation of the National Unity Government and the People’s Defense Force signify a significant, but arguably necessary shift from the protestor’s original non-violent dissent ideology. This film fits well within the discussion of global protest during 2020-2021 against discrimination and threats to democracy and is highly recommended.