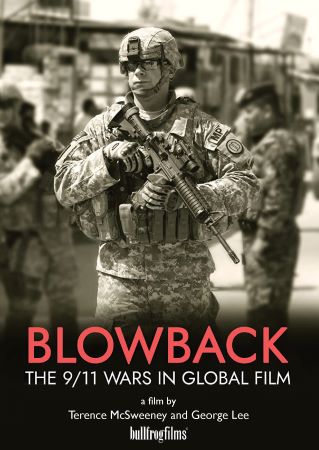 Blowback: The 9/11 Wars in Global Film is an exploration on how movies influence and inform our understanding of war. The film examines the financial guidance that American government agencies such as the CIA and the military can use with filmmakers to ensure positive association and how conflicts such as the Afghanistan and Iraq Wars, known as the 9/11 Wars elsewhere in the world, are depicted outside of America.

The film discusses the use of war films as a modern replacement for monuments, a way to invoke historical reverence, and national exceptionalism. McSweeney and Lee contrast the tropes of the Hollywood bad guys to the stories that these populations are able to tell through their own filmmaking and their cultural impacts. The questions asked in this film on whose story is being told and for what purpose present excellent discussion topics to be explored further by a class.

At less than 30 minutes this film packs a lot of information on both filmmaking and the history of wars in that short time frame, but at no point does the pacing feel rushed or overcrowded. This length is appropriate for viewing during a class and would be most appropriate for upper-level high school, undergraduate and adult viewing.