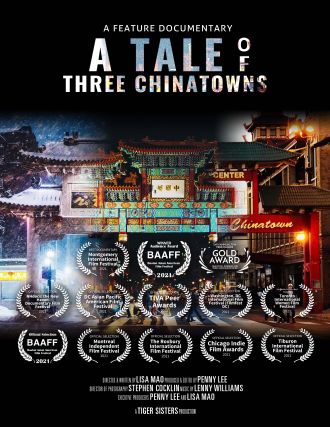 A Tale of Three Chinatowns 2021

There are many questions posed and answered implicitly in Lisa Mao’s A Tale of Three Chinatowns. But perhaps the one that best encapsulates the overall narrative sweep of the film is explicitly articulated by Prof. Andrew Leung of the University of Massachusetts-Boston, one of the throughline academic voices in the film: “The central question that we have to answer is ‘who is Chinatown for?’”

This film uses three Chinatowns as case studies in the challenges that all Chinatowns face, namely gentrification and the appropriation of Chinese culture while Chinese American communities are priced out of the neighborhoods that they built. To get to this general thesis, the film traces a general history of the development of Chinatowns west of the Mississippi and then tracks the more specific histories of Chinese American communities in Boston, Washington D.C., and Chicago. This history is eloquently told through first-hand interviews with community members who grew up in these areas during the 1950s through the 1970s. Copious archival family and personal photographs impart an immediacy and human connection to these verbal memories of generational entrepreneurship, community building, social stigmatization by the majority, and the day-to-day cadence of neighborhoods transformed and, in the case of Washington D.C., arguably almost erased.

The narrative uses some important commonalities (e.g. long-term displacement of original location; importance of community for supporting each other and newly arrived immigrants, et al.) both to throw into contrast differences that have affected the long-term success of each city’s Chinatown and also to draw a strong argument for the idea that each of the case studies is at a different stage of crisis. Washington D.C. represents a once-vibrant Chinatown almost hollowed out by the creation of a convention center and by corporate sponsors—a Chinatown where few Chinese Americans can afford to live or do business and that no longer has an active immigrant community. Chicago presents a Chinatown whose current location has for a long time left it insulated from pressures and has succeeded in growing and forming a strong, cohesive, and politically active community with active mutual aid societies. Boston’s Chinatown is framed as being at a community crisis point, a community that already had to fight for its identity during the high point of urban renewal in America and a community that has been and still is working to be very politically active in protecting social services for and in advocating for affordable housing for current residents and arriving immigrants.

While this film gives a great deal of time, thought, and voice to each of the case study cities, Boston ends up being perhaps most central to the possible thesis question of whom Chinatown is for, Chinese and, more widely, Asian Americans and immigrants or wealthy property developers and the largely White surge of inhabitants in from suburbs. Had the other cities not been so thoughtfully documented, this might be a criticism, but in context, it proves a very strong rhetorical strategy. As it is, the deftly interwoven stories of long-time inhabitants and modern immigrants in each city strengthen this final observation on Boston's predicament, but work to show that, in the end, Boston’s Chinatown is emblematic of the struggles that all Chinatowns have faced, are facing, and will face.

This documentary is extremely well produced and filmed. The narrative is complex, rich, and persuasive. Mao does an amazing job weaving the various strands of visual and audio information together. The highlight is the personal photographs spanning the 1940s to the 1970s which are carefully woven into the personal remembrances which form the heart of the film. These voices and the accompanying photographs act as evocative primary sources and welcome the viewer into experiences that can be both radically personal and universal.

This film is highly recommended. Beyond its immediate and obvious use to Asian American Studies programs, I feel that this is the kind of documentary that would be useful for institutions with Urban Planning and Political Science strengths and could be crucial viewing in lower division coursework on American History and Cultural Studies. I also feel that this documentary could fit very appropriately in an advanced middle or high school class.