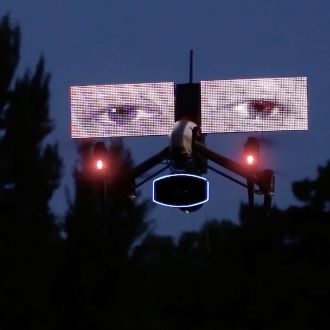 The Art of Un-War centers on the public unsanctioned anti-war art of Krzysztof Wodiczo. Wodiczo utilizes public statues, projecting onto them footage and dialogue of military veterans, migrants and victims of police brutality detailing their trauma from war, both foreign and domestic. This gives these public monuments a layered meaning and an anthropomorphic quality. The imagery of Wodiczo’s works is hauntingly effective. And makes a compelling case against war, particularly the aftermath.

Social justice is a primary theme. This formulaic message is strengthened though with Wodiczo’s artistic demonstrations. For instance, to combat a neighborhood’s desire to oust homeless populations the artist created homeless vehicles which provided shelter and featured each of the displaced as a centerpiece of art. Those who value clever civil disobedience will be entertained, potentially inspired.

Wodiczo’s work is approachable and demonstrates a measure of depth appropriate for general audiences. In brief, a supplemental piece whose inclusion contributes to a collections overall regard. A worthwhile addition for libraries seeking materials of protest.