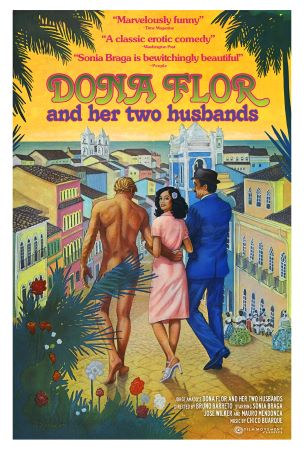 Doña Flor and Her Two Husbands 1976

Emotionally multifaceted and slightly fantastic toward its end, Bruno Barreto’s 1976 Brazilian film Doña Flor and Her Two Husbands explores Doña Flor’s complex emotions and sexuality over the course of her two marriages. Her first husband Vadhino, a rampant womanizer, gambler, and drinker, dies during a street festival. Flor mourns him, and we see through flashbacks the passion and raw sexuality and sensuality of their marriage juxtaposed with its rougher elements; he’s physically abusive, financially dependent on Flor, and frequently abandons her for days at a time. Her second marriage to Teodoro is more emotionally, intellectually, and financially satisfying but lacks the lust, physical intimacy, and carefreeness she craves. Throughout the film, Flor examines her happiness and lack thereof, comparing and contrasting it with the sexual awakening and satisfaction she experiences in each of her marriages.

The film unflinchingly contemplates the internal struggles Flor faces. The film’s explicit and erotic depiction of sex parallels her position as the owner and teacher of her cooking school, emphasizing the sensuality she experiences and discovers about herself. Sexual fulfillment has its limits and Flor also has to contend with herself as a woman of emotional and intellectual desires. She’s a businesswoman, clearly intelligent and discerning, and wants to feel valued and special to her romantic partners. Doña Flor and Her Two Husbands’ focused on the struggle women face in balancing sexual agency and desires with complex emotional needs, a struggle which is still relevant today.

The movie is described as a comedy but didn’t feel especially funny or amusing by modern standards. Musical cues more than the scenes or situations themselves imply comedic moments and scenes. Class and race are also present in the movie. Flor’s husbands occupy different social strata and outside of financial stability and some set changes, these elements and their connotations aren’t explored or acknowledged. The same can be said of race in the film, which is subtle but prominent. The majority of the film’s cast is white with the exception of black actors whose roles are mostly confined to servants or prostitutes.

The sex in the film is depicted erotically and doesn’t feel gratuitous. The film’s sets, costuming, and music place it firmly in the 1970s and serve as a great example of the filmmaking style and technique of the era.

Doña Flor and Her Two Husbands could be an educational resource for several disciplines, including film studies, women and gender studies, and social history.