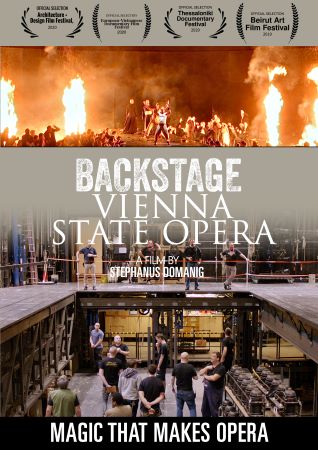 Stephanus Domanig’s Backstage: Vienna State Opera is a documentary about the inner workings of the famous Austrian opera house. Viewers see the literal and metaphorical layers of work and areas of expertise required to maintain the opera’s programming, schedule, and performances. Spanning over a little more than a year, viewers are taken on a journey from a production’s artistic conception and planning to its final product and performance. Interspersed amidst the production journey of Samson and Delilah are performances and behind the scenes views of other running shows at the Vienna State Opera, such as Le Nozze de Figaro, Parsifal, La Traviata, and La Boheme, among others. The documentary is German-language and subtitled.

The strength of the documentary is in its details and emphasis on the people who make up the opera. Members of various departments – make up, stage management, directors, stage crafters, costumers –describe their roles and responsibilities in their own words. No department or responsibility at the opera house is left unexplored; the doorman, facilities maintenance, legal department and more all vitally contribute to keeping the opera house and its performances running. What connects all these varied and separate departments is their immense pride in and love of their work. Several parts of the documentary feature people who’ve been interviewed watching the production and their (sometimes literal) work and actions on-stage and off. Domanig’s film underscores how everyone works together and contributes their expertise and labor to bring about a production’s, and to a larger extent the opera’s, success.

The only major weakness is in the documentary’s organization. There is no overt organization or narrative planning besides the implicit time frame of seeing a production process from start to finish. No reasons are given for why viewers are shown the stage manager first, followed by the doorman, maintenance facility management, etc., all interspersed with short sections pre-planning of Samson and Delilah. Viewers are also thrown right into the pre-production of Samson and Delilah, as well as performances concurrent with its production, with nothing to really distinguish them except brief titles.

The documentary is well-shot and deftly uses small moments to highlight the level of detail and craftmanship in its subject. One of the opening shots takes viewers literally through the audience and stage and reveals the actual levels of the stage and backstage areas hidden from the audience. Domanig fully utilizes the grandeur and sheer size of the opera house and its quirks – there’s even a tended beehive on the roof – to demonstrate its vastness and cultural importance.

Casual adult viewers who enjoy the performing arts as well as those who enjoy behind the scenes documentaries will discover much to cherish and amaze in this film. Backstage: Vienna State Opera is also welcoming for arts beginners who may be unaware of how a performance entity and its components are vital to a production’s and performing company’s success. Given the various departments and expertise featured, this film would also be a unique way for those interested in the performing arts to learn more about the different careers and skillsets within the field beyond obvious roles such as performers and directors.

Humanities and performing arts courses and collections would probably see the most use and appreciation for this documentary. A complete beginner to the performing arts or opera world may be overwhelmed by the grand scope or lack of narration, but this would be amended with a guided course or assignment.

The running theme through all interviewees is their passion for their particular craft and skillset, and those with passion for opera or performance in general will appreciate the myriad of skills, people, and collaboration the documentary features.