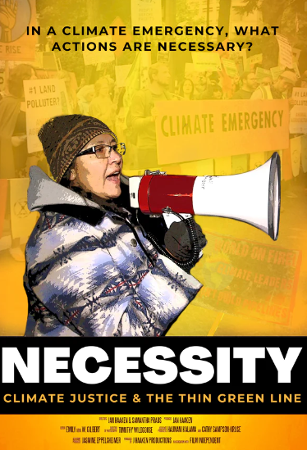 Necessity: Climate Justice and the Thin Green Line is a captivating story of the growth of environmental awareness and building community environmental action in the setting of the Columbia River Gorge. The documentary does a beautiful job of weaving together how different communities work towards one goal: The town of Mossier, The First Nations, the port unions, and citizens of Portland battle separately and together to stop the oil industry from expanding the transfer of oil at the detriment of the land and wildlife. Nevertheless, it is one-sided. If audiences believe that a more drastic approach to climate change is needed, this documentary is more than inspiring; it shows how the climate fight is evolving. Director Jan Haaken shows the strategies of multiple groups that have come together to create a cohesive and formidable network of climate protest warriors who actively campaign and protest the oil industry’s attempt to build an infrastructure. It also helps us to see the layers of activism, personal responsibility, and sacrifice required to protest for change. However, it does not even try to show a reasonably fair perspective of the people who work on the oil trains or those attempting to build infrastructure systems for the oil industry. Perhaps that is not expected in a documentary on climate justice, but viewers should be prepared for a one-sided story.

This film purports to show how those working for climate justice are making a moral case for civil disobedience, and it does that in key points of the film. It is fascinating to watch the protestors go through civil disobedience and peaceful protest instruction from lawyers, work together to plan a protest, and support each other through long, grueling protest rallies, arrests, and court hearings. It is more of a heartfelt tale and introduction to some of the strategies of the movement rather than an in-depth look at the case made by the group known as Extinction Rebellion. The documentary begins with a group in Portland, Oregon protesting an oil train through an act of civil disobedience: planting a garden over the tracks. The film ends with the judge declaring a mistrial due to a hung jury.

This film is compelling but not necessarily convincing to anyone undecided about the level of action needed for climate change. It would be a good addition to academic and public libraries for environmental justice collections and academic libraries with sociology, philosophy, and global studies programs.