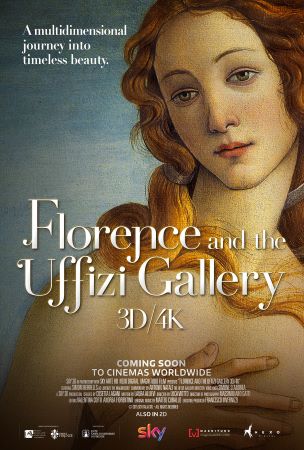 Florence and the Uffizi Gallery 2015

Florence and the Uffizi Gallery presents a survey of Florentine art and architecture during the Medici period. The documentary highlights famous paintings, frescoes, sculptures, and buildings from this period, which roughly aligns with the high Renaissance. The pacing is appropriate for a survey film, and the visuals are excellent, with both wide views and close examination of various details.

While there is a general narrator, the film also jumps frequently to an actor portraying Lorenzo de Medici, who discusses his life in Florence as heir to a family fortune, patron of the arts, and political figure. While this set up is interesting, these asides feel somewhat disconnected to the on-site filming of artifacts and interviews with curators of historic sites and galleries. De Medici is confined within a surreal purgatory castle, talking about his favorite Florentine art and architecture, but unable to see any of the items he remembers except through a waterfall-type overlay. It is a bit jarring each time we cut to him in limbo for a dramatic monologue.

The title may lead screeners to underestimate the scope of the film. The Uffizi gallery, while discussed from an architectural standpoint and shown as the current home of many of the works of art included in the film, is not entirely central to the documentary. We first encounter it about thirty minutes into the run time, and other historic sites, like Piazza della Signoria and the Florence Cathedral, are featured as well.

Overall, this film is recommended as an overview of Florentine art and architecture in the Medici period. It is appropriate for audiences from high school through general adult. Screeners will likely already be aware that Renaissance art frequently includes nude bodies, so, of course, this film will feature many artistic nudes.