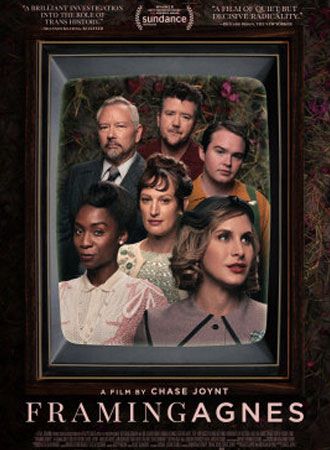 Framing Agnes is a mockumentary that tells several stories from the 1950s files of the UCLA Gender Clinic told by interviews conducted in the past by gender reassignment expert Harold Garfinkel. The film attempts to tell several stories found in the files of the researchers and trans actors portray them with some believability. At times, the film is clumsy, switching from the past to the present so that you know more about the actor who is portraying the character. Though easy to follow, this creates several characters that bombard the viewer with too much information to get a clear picture of what the film is about.

The goal of this film is fleshing out previously unknown trans patients and bringing their story to the public. The characters portrayed were actual people with different struggles. These profiles were from the files of the clinic and their stories are important in trans history. The Agnes story that the film is named for, becomes hard to understand as the viewer watches the character and attempts to figure out what trickery was involved in obtaining the surgery. By the end, you know very little about Agnes other than she was a bit of an anti-hero and was compared to Christine Jorgensen, the first American to have gender reassignment surgery. At the end, the viewer doesn't know much about Agnes and wants to know more about the other characters. Perhaps if the film were longer, more time could be given to developing these stories.

Although there are a few shortcomings for this film, Joynt's effort is important as it brings transexual stories into the public but comes across as an amateur acting assignment. Recommended for college and general adult viewing.