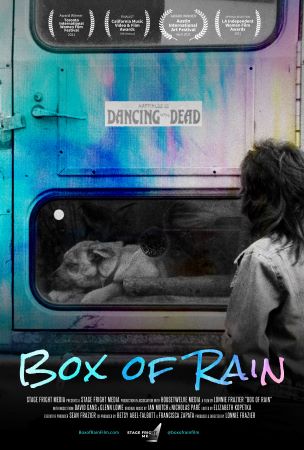 How do YOU define home? The definition of home differs tremendously from person to person. Box of Rain is an exploration of how a traumatic event changed the filmmaker’s definition of home, and how finding community helped her heal.

The filmmaker, Lonnie Frazier, also made this documentary as a thank you to her found community for saving her.

When Frazier was 17 years old, she was raped by a group of local boys she had known since elementary school. She was not supported (and even blamed) when she reached out to her family for help after the assault. Home no longer felt safe, so in 1985 Frazier accepted free tickets to a Grateful Dead concert in Colorado. The catch: she had to drive the friend who gave her the tickets from Maryland to Red Rocks Colorado in the car she had just purchased. And so began her life as a Deadhead (aka fan of the American rock band the Grateful Dead).

Box of Rain highlights interviews with several Deadheads, interspersed with concert footage, tour artifacts and ephemera, newspaper clippings, and footage of fans hitchhiking to shows and displaying their concert tapes. Frazier contributes her own memories and stories too, filmed alongside some of her former traveling companions. She narrates the story of that first road trip; the two friends who accompanied her are interviewed and pictures from the trip document their journey. There is a sense of wonderment on their part that they fearlessly traveled so far, with little money (and a cat!) and no overarching plan other than to get to Red Rocks.

Throughout the film, Deadheads are self-defined as adventurous, generous, and COOL (as in not being a bummer or putting bad vibes out into the world). The stereotype of heavy drug use and abuse within the community is addressed; no one interviewed remembers that as being a focus of the community. What all of the interviewees remember however is the feeling of acceptance and inclusion that the Deadhead community fostered.

This is not a Grateful Dead documentary per se. Their music was definitely the catalyst for the tight knit community that sprung up around it, but other factors contributed to the Deadhead mindscape; their outlook on the world was shaped by 1960s political events and the changing mores of the 1970s. This is a documentary about acceptance; the participants interviewed in Box of Rain found safety, non-judgment and a deep sense of belonging within the Deadhead community.

One of the biggest strengths of this film is the remarkable sense of family that emanates from the Deadheads. Box of Rain captures that extraordinary feeling of finding your people, how you are both surprised and grateful that people like yourself exist and that your paths crossed.

This film is a wonderful love letter to finding acceptance and a true Home.