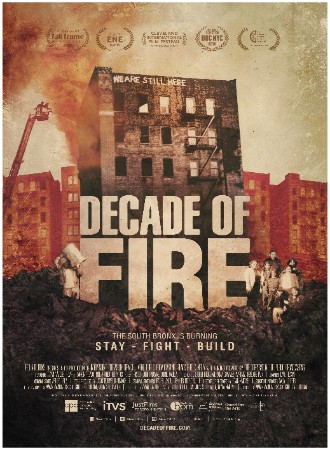 This excellent documentary, Decade of Fire: Stay, Fight, Build reexamines the decade of fire in the South Bronx, a period from the early 1970s until early 1980s when arson destroyed 80% of the housing and leaving 250,000 people lost their homes. For years the media narrative about this tragedy was that the people burned down their neighborhood. This falsehood is exposed by this thoughtful look at life in the South Bronx, as told by residents who lived there in the 1970s.

The main narration is carried by Vivian Vazquez Irizarry, who grew up in the South Bronx and witnessed the destruction of the community caused by redlining, urban renewal, and willful neglect of the South Bronx by political figures from New York, to Albany, to Washington. Budget cuts in New York led to the decision to reduce the number of fire departments, especially those in the South Bronx. Unscrupulous landlords hired youth to burn their buildings down, collect money from a New York State insurance fund, and then abandon the buildings without being required to fix them up. This trend was reversed only in the 1980s when people like Irizarry, who returned from college and started programs to provide the community with the resources to battle the decline.

The film uses television footage and interviews with members of the New York Fire Department, local historians such as Evelyn Gonzales, and long-term residents such as Mike Amadeo, who owned a record store in the South Bronx. Their stories bring to life the sense of community that was targeted and destroyed by racist policies. The film offers hope; however, in the story of how community members collectively restored the Bronx by claiming abandoned buildings, fixing them up, and creating brand new neighborhoods. Today, the same activist spirit is being used to fight gentrification, which threatens to drive out the poorer residents.