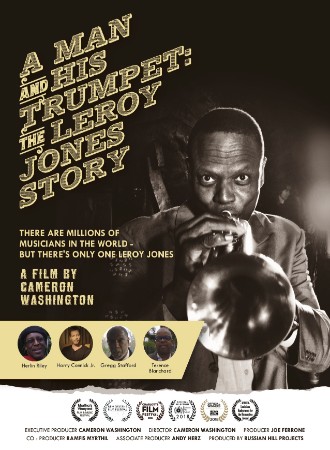 A Man And His Trumpet: The Leroy Jones Story 2018

A Man and His Trumpet: The Leroy Jones Story dives into one of the most influential jazz trumpeters in the United States not named Louis Armstrong. Directed by jack-of-all trades Cameron Washington, this documentary is more than just a biography. It is a story of the identity of a music genre, a man, and the culture of New Orleans.

Born in 1958, Leroy grew up with the sounds of Al Green, Herb Alpert & the Tijuana Brass, and Aretha Franklin blasting throughout his home. He naturally began to emulate these musicians in his garage, playing so loud that he garnered the attention of jazz musician/mover and shaker Danny Barker. Within no time, Barker asked Jones to help him create a local marching band for a church. From there, the young musician developed a style all his own, remarkably during the outs of the Jim Crow era.

Throughout the film, the viewer gets treated to a story within a story. As Jones details his comeuppance in the NOLA music scene, the real tale is of how art brings people together. For a place like New Orleans, culture is a key component that influences the people within it. Through interviews with friends and past bandmates of Jones, the viewer hears how one man touched so many with his dedication, passion, and work ethic with music. Using a trumpet as a vessel for communication, Jones brought countless people together while preserving what he refers to as, “the only true artform we [as African Americans] have to offer the rest of the world.”

Washington’s directing style splices in transitions of New Orleans neighborhoods and landmarks amongst interviews and musical performances. Most shots are point of view and on location, making it feel as if the viewer is having a comfortable conversation with interviewees. The viewer also gets to see photos and videos of Jones playing with the likes of Harry Connick Jr., with whom he has performed alongside for decades.

A Man and His Trumpet is more than just a feel-good story for the viewer. It is a snapshot of how “a rare combination of a great guy and a great talent” unknowingly trailblazed a music genre in a time where it could all be forgotten. With the gentrification of New Orleans, Jones and company seek to keep playing their hearts out until they can no longer buzz through a mouthpiece, use their fingers, or throw their voice. This film would be a strong addition to any library, as the film touches on African American history and the evolution of jazz in the United States.