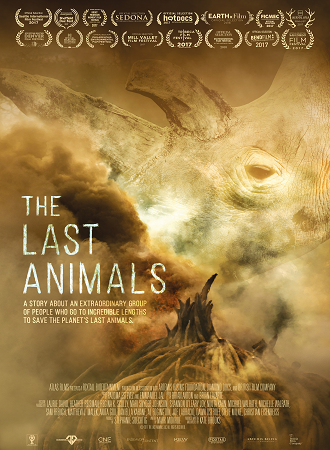 The Last Animals is a trenchant and unflinching look at the last days of the Northern White Rhinoceros. It is also an expose of the trafficking of rhino horns and ivory and the corruption and deadly effects of this trade. The director, Kate Brooks, made her career covering war zones in the Middle East, and she turned her attention to animal extinction after seeing the relationship between the trade of rhino horns and ivory and the funding of terrorism, rebellions, and wars and how it’d incentivized poaching to the point of species collapse. As she became aware that the Northern White Rhino population was in its last days, she changed the focus of her film to that story and how it is a harbinger of the eventual extinction of elephants possibly within decades.

Rhino horns are extremely valuable in Asian black markets as a supposed cure for a wide variety of ailments a well as aphrodisiacs. Ivory is also a valued commodity for jewelry and decorative arts. So poaching is a lucrative and organized crime where traffickers supply the poachers not only with guns but also trucks and even helicopters.

Sam Wasser, a conservation biologist and trafficking expert form the University of Washington, studies ivory and horn trafficking and leads seizures of illegal goods in Hong Kong and Thailand. It is his work that probably best illustrates the scale of the problem. Through DNA testing his research center is able to determine that the majority of ivory is sourced from a couple geographic areas, Tanzania and Congo, and shipped via Mombasa by one major dealer. It is at a scale that suggests some governments are quietly permitting the trafficking to continue.

As a photographer with much experience in war zones, Brooks is deft at showing the humanity of the park rangers and soldiers who risk their lives to protect the elephants in the Garamba National Park. It is indeed a wartime setting and the dangers are real. Automatic weapons and bazookas are carried, and soldiers and poachers are killed.

The video contains much engaging footage including hidden cameras in Laotian jewelry shops, field maneuvers with park rangers and soldiers, ivory seizures, a romping baby rhino, and pleas to end the ivory trade from luminaries such as UK’s Prince William and then-U.S. Secretary of State Hillary Clinton. It is an effective call to action. If it has one weakness, it is in the conflation of the stories of illegal trafficking of horns and tusks with the impacts on the respective species. The story of desperately protecting the survival of the Northern White Rhinoceros is almost intimate in detail but the story of the trafficking and poaching of ivory is much less finely focused and the nexus between the two is somewhat blurry.

The film is compelling nevertheless and the narration style is effective. Though there are other films on these topics, there are none that capture the last days of the Northern White Rhinos so comprehensively. Recommended for all public and academic libraries.