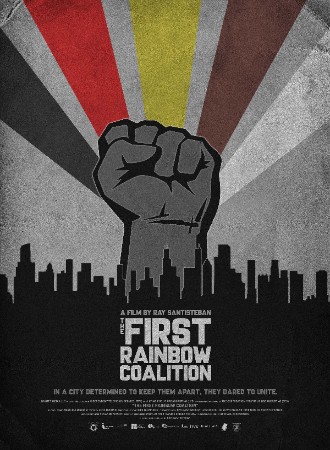 Ray Santisteban’s documentary, The First Rainbow Coalition, is a powerful telling of the unlikely political alliance between the Black Panthers, Young Lords (Puerto Ricans), and the Young Patriots (Southern Whites) that formed in Chicago during the 1960’s. The unifying threads that brought these groups together were crushing poverty, police brutality, and a desire to make a positive change in their communities.

The film succinctly chronicles the story of these political organizations coming together through archived pictures and original video footage. The real strength of the documentary was the interviews Ray Santisteban was able to secure with key members from the Black Panthers, Young Lords, and the Young Patriots. The entire film was paralleled with the old footage of these members, while adding their new commentary. Allowing these men and women to explain and reflect on their mindsets, behaviors, environment, and need for solidarity with the advantage of hindsight. This gave incredible insight into the psyche of the place, time, and feel of this movement. This was done so completely that there was no narrator. The entire story was told through the people who lived it.

The scope of this film is the formation of this coalition, which makes it unique because there is no other documentary that does so. This Rainbow Coalition predates and is the inspiration for Jesse Jackson’s coalition of the same name. This film briefly touches on the more militant and self-defense aspects of the political groups involved but does not focus on it. Documentaries like, Black Panthers: Vanguard of the Revolution and The Black Panthers: Lords of the Revolution are better suited for these subjects. While the segment entitled, Nashville: We Were Warriors from the documentary, A Force More Powerful, focuses on non-violent political movements in the United States that fought for equality during the same time.

The First Rainbow Coalition will fit well for political science and US history courses that need examples of a people’s history or class struggle. This film demonstrates multi-ethnic people and interracial politics joining forces for a common cause during one of the most tumultuous times in United States history.