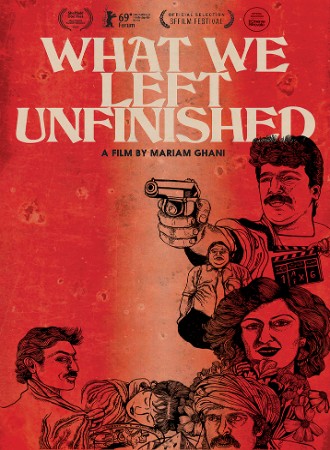 What We Left Unfinished 2019

In What We Left Unfinished, director Mariam Ghani tells the story, in Dari with English, Italian, Spanish and German subtitles, of the state-run company, Afghan Films, and the artists who produced its work. She juxtaposes interviews with directors, actors and crew, with footage from their feature films—both released and those left unfinished—along with present-day footage of some of the very same locations depicted in the Afghan Films productions. The result is an intricate, nonlinear rendering of Afghan history, from the 1978 Communist coup, through the Russian invasion of 1979, the Civil War in the early 1990s, to the Taliban’s takeover in 1994-95, all viewed through the lens of cinema and personal memory.

Ghani’s training as an archivist comes through in her interviews. She lets the camera play out with minimal interaction while subjects relate their histories and describe cooperating with a government that often censored and repressed. These men and women were part of a generation of young intellectuals who aspired to contribute to a cultural awakening in Afghanistan and imagine a new social order. Ultimately, they were thwarted by rigid state ideologies. In her director’s statement, Ghani writes, “What We Left Unfinished is about fiction films that often blurred the line between document and fiction – real soldiers enacting fictional sieges, real bullets in prop guns, real consequences for fake events. Likewise, my film plays on the gaps between film and history, ideal and reality, and past and present Afghanistans.”

The film cannot be viewed passively; it takes active engagement to follow how she blends fictional and archival footage, how subjects contradict themselves and come to terms with their own artistic pasts. Gorgeous cinematic tracking shots, expert editing by Ian Olds and music composed by Qasim Naqvi underscore the film’s elegance.

What We Left Unfinished provides a unique view into a period in Afghanistan not often seen. Its website provides screening information, educational resources and context, including an Afghan history cheat sheet. Subjects for use in the classroom include the history of Afghanistan, the Cold War, legacies of Communism, Cultural Anthropology, Cultural Studies and Cinema Studies. The film is highly recommended.