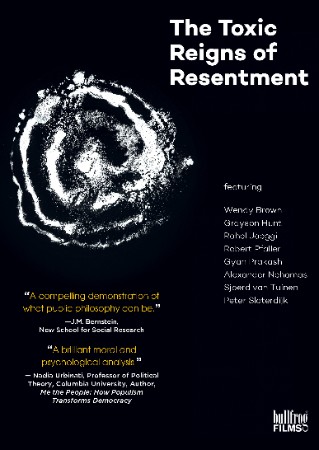 The Toxic Reigns of Resentment 2019

With movements such as populism and nationalism gaining momentum, our global community is fracturing, and humanity is unable to escape the rising resentments that infiltrate society. The Toxic Reigns of Resentment is a timely interview film that brings together scholars from around the world to explore what resentment is at its core and how the sentiment has firmly embedded itself into our politics and culture.

The Toxic Reigns of Resentment centers on the idea that a resentful person or group focuses on finding and punishing the culprit of their suffering. Instead of looking at policies or reflecting inward, resentment causes society to label and blame others, which turns into a permeant hatred. A clear history is drawn from times when priests pacified people through centuries of scapegoating and follows the narrative all the way up to our current culture of “the influencer.” The film is a sober look at resentment as a global phenomenon, illustrated through the rise of populism, nationalism and hate politics. During a time when groups feel pushed aside by the powerful, fear is ruling out more constructive emotions while consistently growing intolerance among race, religion and class alike. Viewers should prepare for open, honest dialogue about the worldwide political arena, with particular focus on President Trump and American politics. Included within these larger topics are segments on scapegoating, political correctness, identity politics, university culture and safe spaces. The scholars interviewed are critical in their assessment of all sides of the issues.

While relatively short, the film packs extensive content into 52 minutes. Such an array of deep topics might easily overwhelm an audience, but filmmakers provide each scholar several opportunities to purposefully state, restate and expand upon their thoughts. The film breaks up topical interview segments through solo dances, as news clips from various decades flash in the background. Instructors have the opportunity here to discuss the meaning of the performance and choice of footage.

The polarizing nature of these topics along with our current socio-political climate could elicit strong emotional responses in group settings. There is also mild cursing at some points. Instructors may need to remind students of appropriate classroom conduct. Never-the-less, The Toxic Reigns of Resentment provides a way for instructors to host an international panel of top scholars right in the classroom. The film is unapologetic about its views and ominous in its ending, all the while begging to answer the essential question: how might we tackle the problem of growing resentment as a global society? Artfully and powerfully presented, this film comes highly recommended for college-level undergraduates (particularly in areas such as Political Science, Sociology, Psychology, and Philosophy) to general adult audiences.