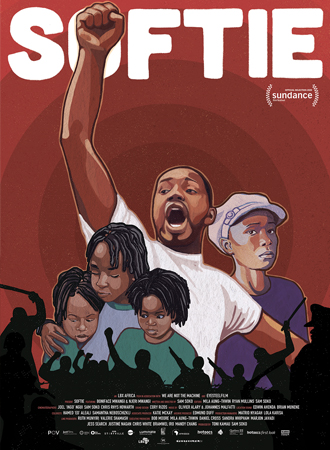 Following award winning photojournalist turned activist turned political candidate, Softie tells the story of Boniface Mwangi, his wife Njeri, and their three children during the 2017 election cycle in Kenya. This well-shot film documents the political violence and corruption that sees peaceful protesters brutally beaten by indifferent police to ensure political rule that benefits the few, promotes division, and ensures unconnected Kenyans demand bribes for their vote as their only means of government support.

In providing context for the larger story of Boniface’s campaign to change the corrupt nature of politics in Kenya, director Sam Soko incorporates archival footage and television newscasts to orient viewers to how British colonialism bred the current political system. For those with little or no understanding of Kenyan political culture, this information is helpful in understanding what drives Boniface to strive for a new political future for Kenya, one that serves the people instead of the ruling class. This is evident as Boniface interacts with voters who are looking for bribes for their votes instead of engaging with his platform.

Weaved into this story is the personal struggle of Boniface and his wife’s competing priorities to place family over country. While working to improve the political climate in Kenya, threats to the safety of Boniface and his family force Njeri and their children to temporarily move to the United States. The strain on the marriage and children become apparent through poignant scenes in which a Father’s Day card is addressed to “mum” and a letter from Njeri leaves Boniface wondering if she will return to Kenya when the threats subside.

As election day nears, there are questions regarding the integrity of the voting process. With a contested election, more violence erupts in the country until the opposition party stunningly concedes the election showing the fragility of democracy. While Boniface continues his political activism, the police violence towards peaceful protesters continues showing the overwhelming difficulty of changing the political machine and has Boniface contemplating his priority to create a better future for Kenya over the well-being of his family.

As the push for social change continues globally, this film is highly recommended and supports collections and curricula in political science, government, African studies, activism, and peace and justice studies. It should be worth noting that this film includes graphic images of political violence. Those planning on utilizing this film in a classroom setting or offering a public viewing should provide a notice to ensure those engaging with this content are prepared for the imagery.