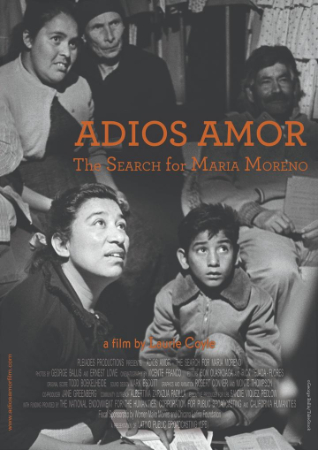 Adios Amor presents the intimate journey of filmmaker Laurie Coyle, on the trail of an unidentified woman organizer with the Agricultural Workers Organizing Committee. Coyle is captivated by the migrant mother of 12 and it is easy to see why, her vivid passion and charisma transcending a myriad of black and white photographs from the early 1960’s. While photographer George Ballis easily identifies his subject as Maria Moreno, Coyle is stumped trying to learn more about her, going so far as to hire a private investigator. Through this journey, Coyle compassionately lays bare some of the many perils and challenges faced by migrant workers and labor organizers. Coyle finds traces of Moreno in labor archives in Detroit, however, when she would appear on payroll one week, she would be gone the next. Indeed, the Moreno family followed crops from state to state, Moreno herself noting in one recording, “The road is our home. The ground is our table. Any place we go, there’s home.”

In Woodlake, California, during a devastating flood, the family starved, her oldest son going temporarily blind. While publicity around her son’s experience led to changes in welfare policy and pay from the union helped to put more food on the table, we begin to see the events and circumstances leading to Moreno all but vanishing from labor movement history. Having encountered legal trouble over allegations of libel by DiGiorgio farms, AWOC risked losing the sponsorship of AFL-CIO: though it is Moreno who won back AFL-CIO’s sponsorship, it is ultimately her undoing, as she is expelled from AWOC by an AFL-CIO representative. Adding insult to injury, Coyle discovers a letter from Cesar Chavez identifying Moreno as a rival. We thereby come to better understand how the most insightful items related to Moreno are found in the personal archives and collections of those who worked with and documented AWOC’s work, outside of official libraries or institutional collections. This narrative is perhaps the greatest strength of Adios Amor: how interpersonal politics and power shape what is elevated in the historical record.

While Moreno moved on from her AWOC work to fulfill her calling as a Pentecostal minister, the viewer can’t help but wonder what was lost to the labor movement with her expulsion. Adios Amor is recommended as an insightful and eye-opening biographical study of an incredibly engaging woman orator-organizer, fighting for farmworkers rights. It complements documentaries focused on other labor organizers well, and lends itself to critical study, at the intersection of labor studies, women’s studies and ethnic studies. Libraries and archives in particular will find value in the narrative of Coyle’s reflective research journey.