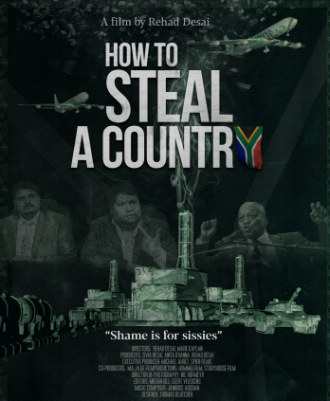 The in-slow-motion takeover of a democratic country and its state institutions is at the core of How to Steal a Country, a full-length documentary that explores the concept of state capture in the Republic of South Africa.

State capture is the hollowing out from the inside of a country’s assets, aided by sitting politicians and people in power. In How to Steal a Country, the diversion of public resources for private gain and concomitant assault on police and law enforcement institutions resulted in 10 years of unabated looting of state coffers, to the tune of one trillion rand (the equivalent of 100 billion USD) and no successful prosecution to date of anyone involved.

Told from the perspective of dogged investigative journalists, the film has the look and feel of a Hollywood political thriller; it starts off with a bang as two whistleblowers, voices masked and bodies in shadow, discuss the hard drive they turned over to a human rights lawyer. The hard drive contained proof that Jacob Zuma, President of South Africa from 2009-2018, had in essence turned over control of the entire country to three brothers from India: Atul, Ajay, and Rajesh ‘Tony’ Gupta.

Journalists watched with growing alarm as the Gupta brothers savvily cultivated relationships with Jacob Zuma’s children during his rise to power in the African National Congress. After becoming established in Zuma’s inner circle, the Gupta’s began their plundering of state contracts through the backdoor, as Business Development Partners. Zuma was elected President in 2009, and that same year investigative journalists began to document his use of public funds to build a private family home for himself. In the meantime, Zuma’s son, Duduzane, was taking a financial cut of every significant Gupta state contract and infrastructure investment deal.

As the years pass and investigations intensify, the Gupta brothers go into the media business, which gives them their own platform to fight the growing number of corruption charges against them. They control a newspaper (The New Age) as well as a television station (Africa News Network 7, aka ANN7). The Guptas are also emboldened enough to use a state Air Force base as a landing pad for a family wedding in 2013; on the plane were Indian guests for Atul Gupta’s niece’s wedding. The guests had no entry visas, there was no clearance for the plane to land, and the Waterkloof Air Force Base is a designated South African key point. This brazenness was seen as a giant red flag by anyone paying attention to the ongoing takeover of the country.

Journalists continued to hammer away at the Guptas, trying in vain to break through the propaganda and outright lies being perpetuated by South African politicians and leaders regarding the situation in their country. As unemployment numbers rose and investment into South Africa slowed, citizens began to take notice. People began protesting and calling the Guptas out; supporters of the Guptas organized vicious social media attacks on journalists, as well as an online campaign called #WhiteMonopolyCapital, designed to discredit legitimate concerns about the corruption and plunder. Zuma supporters even violently took over a public meeting coordinated by investigative journalists, culminating in police being called to remove them.

Throughout this unfolding crisis, journalists needed proof, which was very hard to come by. When the whistleblowers come forward with the hard drive and proof journalists need to prove their corruption charges, the feeling of vindication in the film is immediate and absolute. The hard drive was described by some in the film as South Africa’s Panama Papers. This proof ultimately led to the resignation of Jacob Zuma, along with his attendance at the Zondo Commission of Inquiry into State Capture in 2019. (Thuli Madonsela, the Public Protector from 2009-2016, commissioned a State of Capture report in 2016.

How to Steal a Country is focused on reckoning; how do citizens and journalists reckon with and heal from an event such as state capture? The gaslighting, lies and corruption run so deep and are rebuffed with such consistent force that the viewer can breathe a sigh of relief along with the journalists at the end of the film. Watching events unfold over the course of the film takes a toll; the filmmaker’s technique of juxtaposing eyewitness video with official denial of said events is effective and helps put the viewer in the same headspace as the people watching their country being strangled right in front of their eyes.

One of the biggest strengths of How to Steal a Country is its ability to pull you into the crisis slowly; the helplessness you feel as you witness the systemic collapse of state institutions is a slow boil. The insidiousness of state capture as a concept is well documented, with plenty of footage of BBC news interviews, Parliament proceedings, newspaper and magazine headlines, etc. A country that has struggled mightily with reckoning over apartheid, South Africa now has to struggle with watching its fledgling democracy be gutted from the inside out.

How to Steal a Country asks the question: “Who Watches the Watchmen?”. In this situation, investigative journalists were watching, and their herculean efforts tenuously held democracy together while rooting out corruption and giving state functions some time to heal and right themselves. This film is recommended.