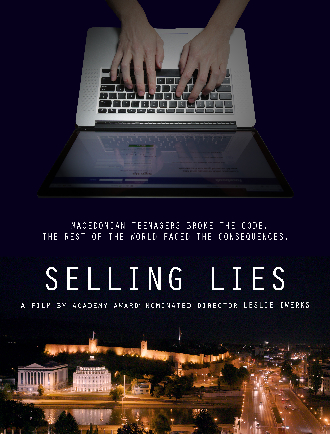 Selling Lies examines the fake news generated in Macedonia focusing on U.S. politics preceding the 2016 elections. Indeed, it seems ludicrous that young Macedonians could have an impact on U.S. presidential politics but producer/director Leslie Iwerks ably shows how this chain of events occurred. Interviews, including one with a prominent Macedonian fake news creator, outline how ad revenue streams on the web create economic incentives for fake and/or sensationalist news. Selling Lies describes the economic situation in Macedonia and how a dedicated fake news creator could make many times the average wage of a normal Macedonian. Amorally “trying to make a buck” from peddling falsehoods combined with the decline of traditional media outlets and the rise of social media as a primary source of news helped lead to the epidemic of fake news in the period leading to the 2016 U.S. elections.

Selling Lies does a particularly good job of covering a lot of material in a short amount of time. Despite the quick pace of the film, nothing seemed rushed and the argument the filmmaker puts forth never seems strained or loses any threads. Selling Lies could serve as a solid entry point for larger discussions on fake news and misinformation on the internet. Viewers will likely be left hungry for more knowledge about the topic, but that is the mark of a wonderful appetizer, not of an incomplete meal.