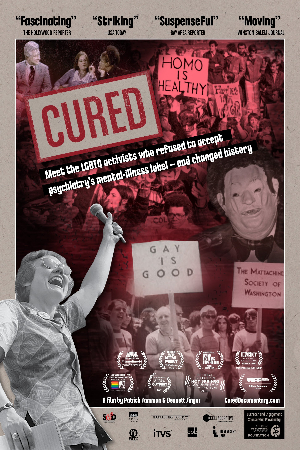 If you were gay in the early to middle of the twentieth century in the United States, you would most likely be deemed mentally ill by society. The American Psychiatric Association (APA) solidified that, in 1952, as they released the first edition of the Diagnostic and Statistical Manual of Mental Disorders (DSM) and listed homosexuality as an official sexual deviation that needed to be treated as any other illness. This documentary starts with the period of time when the LGBTQ people of the U.S. were subject to blackmail, harassment and medical torture. As the documentary progresses, gay liberation and protests are seen in archival footage and soundbites. Much of the archival footage that has been collected for the documentary, has never been seen before. The production value is exceptional.

The main storyline of the documentary revolves around the APA and the people that spoke out about the classification of homosexuality as an illness. There is significant footage from several APA conference panels featuring outspoken gay liberation pioneers. Featured activists include Barbara Gittings, Lawrence Hartmann, Charles Silverstein, Magora Kennedy, and so many more. Because of the outspoken activists featured here, homosexuality was finally removed from the DSM in 1974 affirming that there is no difference in pathology in regards to straight and gay individuals.

Essential viewing for understanding the history of how the field of psychiatry has evolved to accept sexuality on a spectrum. Suitable for high school and up. A highly accessible and well produced documentary.