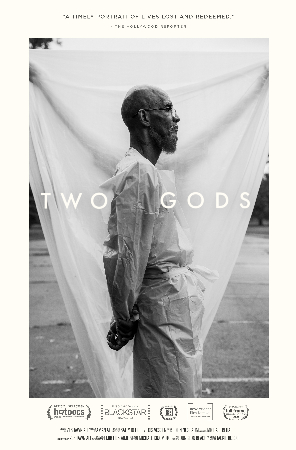 Two Gods is an observational documentary about a Muslim casket maker and two boys he mentors in Newark, New Jersey. Hanif is an ex-con who has found purpose in building caskets and participating in body washing that coincides with Islamic burial rituals. These rituals done for Muslims by Muslims demonstrates and teaches the community bonds that hold them together.

This film primarily follows Hanif’s interaction with two young men from the neighborhood, Furquan and Naz, 12 and 17 years old respectively. It is quite touching to see them respond to Hanif’s fatherly attention. He does this by showing them how to build caskets, spending time with them, and being interested in their lives.

Director Zeshawn Ali, and his brother, producer Aman Ali embedded themselves within the Newark Muslim community for this documentary. This allowed for them to intimately accompany Hanif, Naz, and Furquan in their day to day lives. Thus, the viewer is able to witness their struggles like Hanif and Naz getting pulled into street life and Furquan’s familial problems.

There are many themes in this documentary. The title, Two Gods, per Zeshawn Ali refers to the idea that a man can not serve two gods at once. Specifically, that one cannot worship Allah and be of the streets. There must be a choosing. Other themes include that success doesn’t happen in a vacuum and that community, skills to support oneself financially, and mentorship are indispensable for achieving productive lives.

Two Gods is pensive and develops at an unhurried pace. It is shot in black-and-white and has won awards for its cinematography. At an 82-minute runtime it needs to be watched in its entirety to receive the full gravity of the film. The only possible drawback to the film is that Zeshawn Ali, by his own admission, became too close to the people he was filming and perhaps was too sympathetic. This presented no major setback to film and therefore earns a rating of Highly Recommended for a new look on Islam in America and the power of mentorship. It would work well with Sociology, African American Studies, Religious Studies, and Criminal Justice courses.