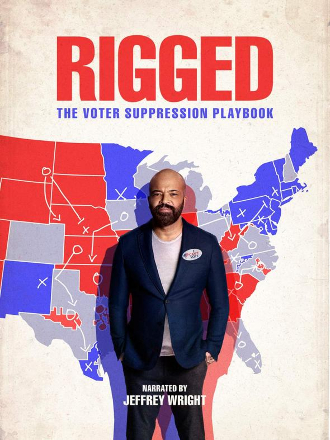 According to the U.S. Constitution, voting is a right and a privilege. Many constitutional amendments have been ratified since the first election. However, none of them made voting mandatory for U.S. citizens. When it became obvious to ultra-conservative, and right-wing political groups that in November 2008, the first African American named Barack Obama would become President of the United States, the so-called “Voter Suppression Playbook” came into play across many Republican Party state legislatures. Ultra-conservatives along with many Republican party members began to make changes to the voting laws of their State to limit the right to vote in minority-based communities using tactics that were clearly questionable as this film illustrates.

When it became evident that minority communities across the country and especially in the South, were voting in record numbers that allowed for the election of Barack Obama, the so-called “Voter Suppression Playbook” came into being.

Rigged is a serious documentary illustrating how the political landscape fueled by ultra-conservatives and members of the Republican Party legally changed voting rights for minorities. States like North Carolina, Kentucky, Missouri, Tennessee and Texas, enacted changes in their voting laws which in effect, denied many minority voters their right to cast their votes in either past or present presidential, state, or local elections.

When these legislated laws were thrown out on the federal level, the “Playbook's” next plan of attack was getting the federal courts changed with Justices in district courts, aligned to ‘right-wing’ politics and the suppression minority votes when Donald Trump became President. This is a must-see film on how far ‘racism’ still permeates the political, social, and economic landscape of America today.