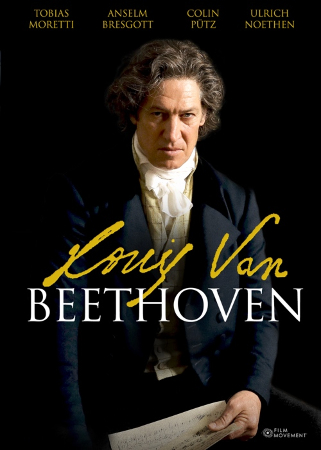 Louis van Beethoven attempts to present a more humanized version of the larger-than-life figure of the classical composure (like substituting Louis for Ludwig). Instead of focusing on the creation of his most iconic music, the film provides audiences a bookended view of the composure’s life. It begins with scenes from 1826 of him as a gruff and tumultuous old man. However, the main focus of the film are flashbacks to the early years of the iconic composer’s life, up until his 1792 journey to Vienna to study with Haydn.

These formative years start with him as a young musical prodigy and continue through the people (such not quite historical love interest), and sociopolitical events (like the United States’ Declaration of Independence) that may have influenced his music. Beethoven’s family life, often tragic, also played an important role in his development – losing siblings and a mother to illness during these years, and a father who succumbs to alcoholism in his grief. His familial relationship become even more complex and turbulent throughout his life, with the older Beethoven in 1826 reluctantly retreating in the final months of his life to a younger brother’s estate with a nephew (son of a deceased brother) accompanying him.

The flashback structure of the film, with its choppy nature and the lack of explanation on some of the social and political events, could cause an audience to lose its way, and its interest, in the film. In addition, many of the personal relationships lack enough background and can leave viewers confused at points. However, with the right preface, the film can provide a unique view into the development of one of the most recognized composers of the western world. Today we see Beethoven, and others of his ilk, as musical titans, but the film makes the case that, in their time, they were often reliant on the whims of the nobility and their patrons who were quick to lose interest when another musical genius came down the pike.

Overall, the film is recommended as auxiliary or supplemental material to a discussion on Beethoven, his early life, and influences. The gaps in the narrative require additional material to create a fuller view of Beethoven’s biography, and his social and political context.