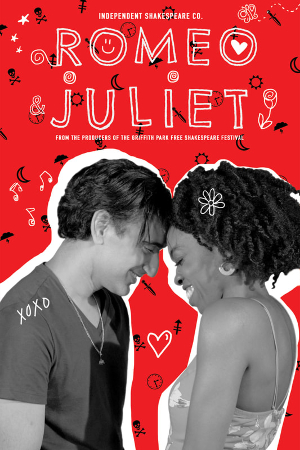 Just as Baz Luhrman’s Romeo + Juliet captured the aesthetics of the 1990s, this Independent Shakespeare Co. production of the Shakespearean classic engenders the realities of the current zeitgeist with modern modes of communication: FaceTime, smartphones, Instagram and graphic memes - not to mention references to a pandemic, in both content and style.

The production, skillfully directed by Melissa Chalsma with a catchy musical landscape created by David Melville, developed from an online theatre event created by the company (helmed by the husband and wife team), originally incorporated pre-recorded footage with “live” Zoom performances and audience participation. In terms of pure entertainment, the online theatrical event was perhaps a more successful endeavor nevertheless the film remarkably illustrates the 2020 experience through the lens of the well-known play.

The film uses the original text along with modern prose, including a mock celebrity show “Verona Live! With Xavi Moreno” and a talk radio podcast with Friar Lawrence to further the plot. Both modern graphic elements and animated drawings highlight narrative moments and add production value to an otherwise straightforward actor-driven piece. The performances clarify the language, character and story all while working within an online video environment. Nikhil Pai (Romeo) and Bukola Ogunmola (Juliet) express the passion and volatility of the young lovers and are joined by a solid supporting cast, including delightful performances by Aisha Kabia (Lady Capulet) and Bernadette Sullivan (Nurse) - and an engaging turn by a female Benvolio, Katherine Powers.

The Zoom capture and actors connecting in different spaces is meticulously filmed and edited. Eyelines are precisely matched as Lady Capulet and the Nurse speak to Juliet about Paris in bubbles over her shoulder. Romeo mourns the loss of Rosalind on a rooftop via phone with Benvolio, producing interesting visuals with engaging performances. Juliet and the Nurse speak through a “door,” connecting with each other through the text and given circumstances of the scene despite being in clearly different physical locations.

The traditionally filmed elements where the actors have gathered in live space together are, occasionally, less successful. For example, the fight leading to the death of Benvolio and Tybalt, shot with the conceit of being witness footage on a phone, feels clunky and less like a bystander shooting a violent street incident and more like a sequence that wasn’t well thought out in pre-production, translating into a less than fully realized concept, especially when compared to many of the other scenes in the film which are so well-planned and executed.

Independent Shakespeare Company’s modern adaptation of Romeo and Juliet could be screened with Baz Luhrman’s film as well as the classic Zeffirelli production in a middle school or high school English or Drama class looking to dissect the iconic play. The film would also be an invaluable resource for a class exploring the possibilities of online and interactive theatre experiences. So much of the connectivity realized in response to the 2020 pandemic was on the precipice of reality before the virus fast tracked these potentialities. After lockdown, the only way to create in a collaborative realm had to be through online spaces which meant new forms and new prospects for creation such as is exemplified in this film.