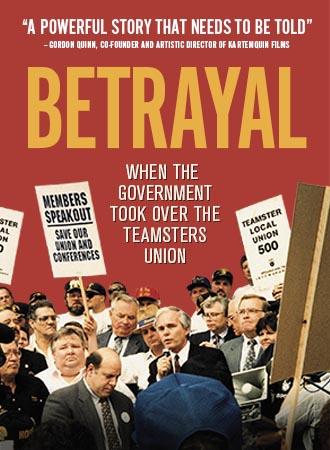 Betrayal: When the Government Took Over the Teamsters Union 2021

This documentary uses historical video footage, newspaper articles, and interviews with former Teamster members to tell the compelling story of the US government's 30-year oversight of the Teamsters Union. It outlines how the government's original goal of removing the influence of organized crime became corrupt by the lack of oversight and the apparent politicization of the established Independent Review Board (IRB). The documentary argues that the government oversight was an abuse of power which weakened the union and its ability to represent its members.

The bulk of this documentary is interviews with individuals important to the story. However, it may be hard for a novice audience member to keep track of the individuals and the roles they played. Key members of the story, including Rudy Giuliani and James Hoffa denied interview requests, but the lack of their perspectives can be felt when trying to judge the balance of the documentary and its perspective. This documentary is clearly inclined towards the Teamsters Union and the members who suffered under government oversight. While not necessarily a negative for the film, in a classroom setting it might require the instructor to provide additional context when he or she introduces the film.

Decisions from the Independent Review Board (IRB) to sanction or expel members, even those in elected positions in the union, took a toll personally and financially on members. The documentary highlights the experiences of Bill Hogan, a former Teamster leader. Those without a labor/union background might fight it difficult to follow the case against Bill, and its repercussions with his friends and family. In addition, the timeline of events is not always clear. But the emotional and personal interviews help the audience see its effects.

The overall structure of the documentary tends to jump around. The film begins with a discussion on the contributions Bill Hogan made to the Teamsters without much of an introduction of who he is and his role in the story of government oversight. It is eleven minutes in until the audience receives any history or background information on the Teamsters. This may make it hard for classroom audiences to keep their attention or follow the information provided to them.

Because of this structure, and the lack of context, it would be beneficial to provide external information and additional sources to students along with its viewing. It also may be more valuable to upper-level students with background knowledge of the labor union history in the United States. This film does a good job of presenting issues related to civil liberties, workers' rights, and freedom of speech that should lead to many meaningful classroom conversations.

Overall, this film is recommended for upper-level college courses focusing on the history of labor or the current status of labor in the United States. And, for general audiences with a background in the topic.