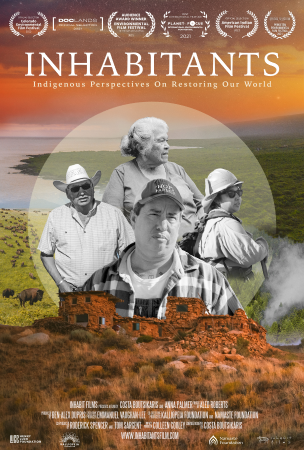 Inhabitants: Indigenous Perspectives On Restoring Our World is a nuanced documentary that covers the traditional land management practices of five Indigenous groups in the context of climate change. It highlights how Indigenous communities in the US are restoring traditional practices that were disrupted by colonialism, and how this traditional knowledge is essential when facing the climate crisis.

Inhabitants highlights the Hopi’s dryland farming in Arizona, the Karuk Tribe of California’s forest management through prescribed fire, the return of bison to the Blackfeet reservation in Montana, the sustainable forestry management of the Menominee in Wisconsin, and the restoration of agroforestry in Hawaii. Each segment of the film details the benefits of these practices and how Indigenous knowledge makes for more sustainable and climate resistant land management. Inhabitants also describes how colonialism disrupted or banned these traditional practices. It shows the wide-ranging impacts of colonialism on Indigenous peoples while also highlighting Indigenous resilience and the value of traditional knowledge. Each segment of the film explores these themes in different ways, making for a rich and nuanced documentary. Though Inhabitants is a short documentary, it provides enough information about each of the highlighted Indigenous communities and their practices for each segment to stand on its own.

Inhabitants is a very well-constructed and well filmed documentary that would be valuable to Indigenous studies, environmental sciences or agriculture courses. This documentary would also have wide appeal for a general audience interested in Indigenous perspectives, sustainable land management or climate change action.