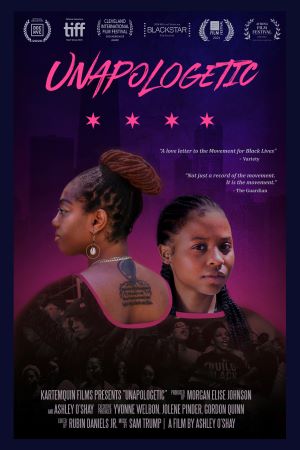 Filmed in 2015, this incisive documentary shows us the struggle of two, black female activists as they seek justice in Chicago for the murder of Rekia Boyd by an off-duty police officer Dante Servin. The film examines not just the work of Janaé Bonsu and Ambrell "Bella" Gambrell, but their lives as well. Bonsu has moved to Chicago to pursue her PhD and to make the city more woke to the plight of its black citizens; Gambrell is a charismatic Raptivist whose family has deep roots in the city and a history with the policing system that is structurally racist. Their quest seems quixotic, but they persevere and in their own way vindicated.

The film is engrossing, shot with a hand-held camera, which we glimpse in a bathroom scene, and scored with an impressive array of urban contemporary music. The film takes us through Chicago and gives us a visual poem of life in what some have called the capital of Black America .

The film is distressing in its exposure of structural racism but uplifting because of the promising future that we see in the lives of the Janae and Bella and in their representation of fourth wave feminism. Strongly recommended for college students.