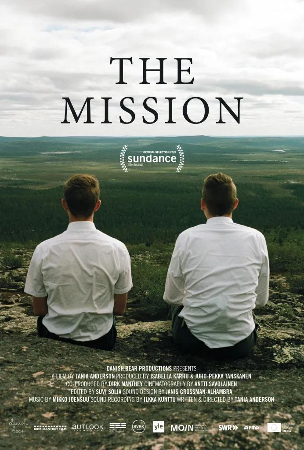 The Mission is a quiet film. Set against the backdrop of Wasatch mountain range in the small Mormon community of Nephi Utah, 85 miles south of Salt Lake City and the cold and starkly beautiful countryside of Finland, The Mission follows four young missionaries from the Church of Jesus Christ of Latter Day Saints (LDS) as they train for and set out on a 2-year rite of passage in the Mormon Faith. The voices are calm, the music is spare and frequently church-like, either organ, choir, or explicitly worship folk songs, contributed by one of the documentary subjects. There is a grandness to the film environments that contributes to the seriousness with which the subjects take the task ahead of them. Director Tania Anderson’s pacing of the film and the respect with which she treats the subjects, their colleagues and their families, directs the viewer to grant a similar seriousness to their reception of the documentary. This respect no doubt was a factor in the level of access given to Anderson by the authorities in the Church of Jesus Christ of Latter Day Saints (LDS), a sect not known for its openness to the scrutiny of non-members. Anderson and her crew witness Mormon ceremonies, private pastoral instruction, counseling by church elders, and even evangelical proselytizing. In some instances, this missionary work culminates in baptism into the Mormon faith, though the actual photography of a baptism is restricted to the witnesses in the Finnish Mormon Chapel where the ceremony takes place.

The Mission follows Megan, Tyler, McKenna and Kai for more than two years as the four nineteen-year-old missionaries prepare for, train, perform, return from, and reflect upon their experiences in the highly secular society of Finland. The film is shot in a verité style eschewing any narration, commentary or explanation, which encourages the viewer to feel as if they are a part of the events as they unfold. For the American viewer, this sense is intensified by the unavoidable visual and audible reminders of just how mainstream, familiar and mundane the lives of these young Americans are, despite their membership in a religious minority of just 6.5 million in the United States. For most Americans, the faces and homes, scenes, activities and behaviors of the missionaries and their families will be very familiar to their own lives, or if not their lives, the lives of the ‘average’ American represented in the mainstream culture and in the media. For Americans who regularly attend a Church of most Christian Denominations, the similarities will be even more familiar.

Though mainstream Christianity does not consider the LDS church to be Christian, members of the LDS church place Jesus Christ at the center of their worship and the rhetoric of the LDS church as expressed by the film’s participants is nearly indistinguishable from other Christian gospel with the obvious exception of personages and narratives from the Book of Mormon.

None of this commentary about the almost eerie familiarity of the lives of these missionaries is to say that the film itself is boring. Rather, as we witness the experiences of these missionaries from a sect that few Americans have experience with and which is portrayed in a stereotypical fashion in the dominant culture, we are fascinated with the sense that the reactions and responses we see from the young missionaries is not terribly removed from how we or our own children might react in the same situation. After all, despite the uniqueness of community environment and personal circumstance, we all share some experience of the dominant culture and learn to navigate it through common experiences.

Having been encouraged to identify with the American-ness of these youthful missionaries, we can see past, or perhaps briefly forget, that they are part of a belief system that the majority of the population finds strikingly odd. We are able to sympathize with the missionaries as they do the often unrewarding and mundane work of asking to share their beliefs with strangers in a strange culture. More often than not they are ignored or politely discouraged though the missionaries do at times find themselves the objects of mild scorn or enlivened resistance.

It becomes clear that, despite their positive mental attitudes and their frequent professions of certainty in their faith and righteousness, the missionaries experience some disillusionment given the difficulty of their task. It is ultimately with a sense of relief and gratitude that the missionaries return home to welcoming families back in Utah after having completed their two-year obligation. Each of the now 21-year-old missionaries express their anticipation of embarking on the next of the church’s priorities for them, that of marriage and family.

Given the commonalities between the day-to-day cultural expression of the documentary subjects and the American culture at large, certain aspects of the LDS cultural practices are drawn in stark relief. The clearest of these differences is the strict patriarchy to which the church and its members adhere. Men dominate and are the only gender allowed to be priests. The 19-year old male missionaries are referred to as ‘elders’ whereas the women are ‘sisters’. In the training center in Provo Utah, both men and women teach the young initiates, however students of different sexes are separated by seating on either side of a room. Women do not wear pants, or short hair, they never serve as missionaries in opposite sex pairs, and the rules by which they are governed on a mission restrict their communication with their families and then to only once per week. Missionaries of both sexes are also bound to strict behavioral standards in which they must always be in the presence of their mission partner, except when in the bathroom. In the larger LDS culture gender expression and sexual orientation other than traditional cisgender and heterosexual normativity are rejected, although, not to draw too harsh a portrait, the family of one missionary includes a gay brother who is not active in the church and (we learn) returned early from their own mission experience..

The Mission is not an earth-shattering film, or a controversial expose of repressive LDS culture. It is a frank and generous portrayal of a common experience of nearly all young members of a very successful American religious subculture. A religious minority that holds a great deal of political, economic and social power far outweighing their numbers. The Mission is appropriate viewing for high school and college level sociology courses, an interesting example of understated verité filmmaking for the student of documentary, and a good example of contemporary ethnography in the study of religious culture.